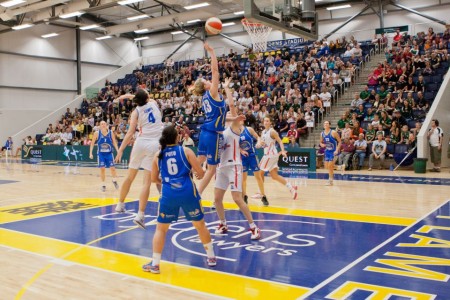 The new arena will accommodate badminton, indoor football/futsal, netball and basketball and, with a permanent grandstand and broadcast facilities, the arena also be the home court for the Brydens Sydney Uni Flames team competing in the Womens National Backetball League (WNBL).

In addition to its role as an elite sport facility, Sydney Uni Sport & Fitness (SUSF) are also highlighting the facility as a community asset, holding a 'Free Family Open Day' on Saturday 17th August.

Billed as the "inner west's best new gym facility", SUSF are keen to emphasise the opportunities for the facility to satisfy the sporting, recreation and fitness goals of the local community.

As SUSF Executive Director Robert Smithies explains "there have never been more opportunities for the Inner West community to satisfy their sporting, recreational and fitness goals."

In addition to the Sydney Uni Sports & Aquatic Centre, SUSF also operate the Arena Sports Centre in nearby Camperdown.

For more information go to www.susf.com.au/