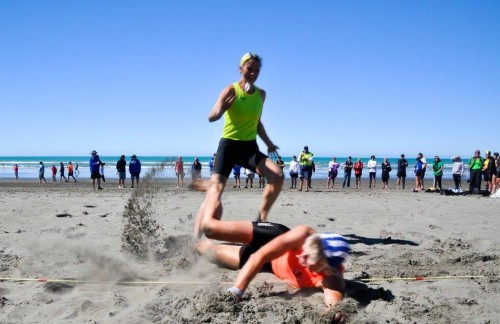 The coastal Christchurch suburb of New Brighton will be alive with activity from 16th to 19th March as over 1,200 surf lifesaving athletes take on four intense days of racing.

The 2017 TSB Bank New Zealand Surf Life Saving Championships kicks off today with the Masters events (age 30+) which paves the way for the Open competitors, who are all fully qualified and active lifeguards, from Friday through to Sunday.

The annual national championship has run for over 100 years and it is an integral part of surf lifesaving in New Zealand.

Events range from beach sprints and board rescues to Ironman and Surf Boats.

Since the championships started in 1915, Christchurch has hosted 10 times.

The event was supposed to be held in Christchurch in 2011 to celebrate 100 years of Surf Life Saving but due to the earthquakes three weeks prior, the event was relocated to Mount Maunganui.

Surf Life Saving New Zealand Sport Manager Mike Lord says it’s fantastic to be coming back to Christchurch for the eleventh time and supporting the New Brighton club in hosting such a major event.

Lord stated “as a result of holding the event in the South Island, we’re seeing a lot more participation from our Southern Region clubs, which is fantastic. Over half of the competing Masters athletes are from the South Island.”

Of the 1,276 total athletes taking part this year, 405 of them are from the South Island. There are 223 Masters competitors representing 33 different Surf Life Saving Clubs and the remaining 1,053 Open athletes are representing 45 clubs.

The largest contingent comes from West Auckland club Piha with 70 athletes followed closely by Mt Maunganui with 69 and Orewa with 64.

Lord says the weather forecast is looking positive with good conditions for the four days of racing, adding “these athletes having been training hard all season and competing at local and regional events in the build up to this year’s national champs. They will be racing hard and giving it their all but it’s also a great opportunity for them to catch up with their friends and fellow athletes and celebrate another great season.”

At the conclusion of the national champs on Sunday, Surf Life Saving New Zealand will be announcing its High Performance Squads for the 2018 Lifesaving World Championship campaign.