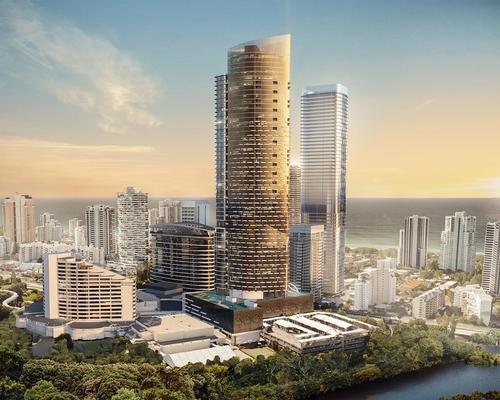 Hospitality and casino operator The Star Entertainment Group has revealed a masterplan for a multi-billion dollar “globally-competitive integrated resort” on the country’s Gold Coast.

The group is working with the City of Gold Coast Council and Queensland Government to significantly expand the existing Jupiters hotel and casino property on Broadbeach, located next to the Gold Coast Convention and Exhibition Centre.

At the heart of the proposal is a new 200 metre high tower, featuring luxury apartments and a 700-room 4.5 star hotel.

In addition, the company plans to create up to five new hotel buildings, entertainment facilities, tropical gardens, pools and spa, and a recreational deck.

These additions would follow another new tower, which has already been approved and is under construction. Featuring a six-star hotel, that building will be 17-storeys high when completed. A full refurbishment of Jupiters’ 600 existing hotel rooms is also taking place.

If the proposed tower is approved by planners, the whole redevelopment project will be worth up to $850 million, in addition to the millions of dollars already spent on the resort.

Introducing the proposal, Star Entertainment Group Managing Director and Chief Executive Matt Bekier, stated “this proposed masterplan concept is about building on the exciting tourism forecasts we are seeing for the Gold Coast, with much-needed new infrastructure to deliver an international world-class integrated resort on the coast without the need for any additional poker machines.”

“It would ensure our current projects complement and support our longer-term investment plans, with overall design that achieves the right mix of accommodation and leisure offerings, and also importantly improves connectivity throughout the local Broadbeach precinct.”

Public information sessions will be held from now until 9th June 2016 to inform the community about the masterplan.

If the masterplan is approved, construction on the new tower could commence in 2017 on the ocean side of the existing property.