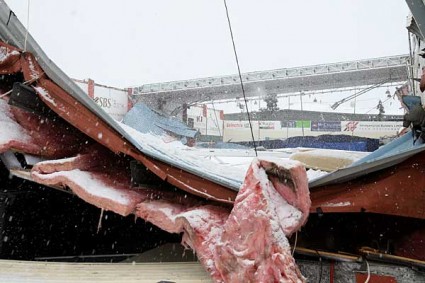 New Zealand's High Court has awarded Stadium Southland's insurers nearly $17 million after it found the arena's roof collapsed under snow in 2010 because a stadium engineer and the Invercargill City Council were negligent.

Lawyers acting for the Council's insurance company RiskPool say they are considering an appeal because of the implications the decision will have for councils and ratepayers throughout New Zealand.

After hearing 15 days of evidence in the High Court at Christchurch, Justice Rachel Dunningham ordered $16,998,225.66 in damages and interest be paid to insurers IAG, which had sought $26.2m under the name of the Southland Indoor Leisure Centre Charitable Trust to recoup costs after it rebuilt the stadium.

Fairfax NZ reported that Invercargill engineer Tony Major's failure to ensure roofing work completed in 2000 complied with the building code meant he was 90% responsible for the collapse, Justice Dunningham ruled.

In her decision, Justice Dunningham said Major was responsible for monitoring construction of the remedial work and providing written confirmation that it was carried out in accordance with the plans and the building code.

She stated that his failure to do so was "a serious abdication" of his professional responsibilities.

"Instead he relied on the steelwork fabricator's word that the work was done correctly."

Major also provided a misleading construction review statement to the council, while failing to provide other information the council needed from him.

Justice Dunningham added "that, too, was negligent."

Invercargill City Council was 10% liable because it signed off on the work without being sure it was up to scratch.

Council Chief Executive Richard King said because the Council was fully insured, ratepayers had already paid the $10,000 excess and would not be required to pay anything more.

If Major, who has already paid a $1m settlement, was unable to come up with his 90% share, Council insurers RiskPool may be required to pay the full amount, King said.

The Council argued even if it had properly issued the code of compliance certificate, the roof would still have inevitably collapsed.

Justice Dunningham found this was not true, ruling condition four of the building consent - dealing with structure and plumbing - was never satisfied.

Justice Dunningham continued that a "reasonable and prudent" Council would have required this before the certificate was issued, and had it been properly issued it was likely the defects that led to the roof's collapse would have been detected.

The Council wanted the damages reduced because the stadium trust failed to take engineering advice to inspect the welding on the roof trusses for deterioration in 2006.

If it had been inspected, the deficient welding would have been found and fixed well before the roof collapsed four years later, the Council added.

But Justice Dunningham found the trust was not negligible because the advice did not put the trust on notice about the potential safety risk the trusses posed.

In a statement, Heaney & Partners - the lawyers acting for RiskPool - said it was considering an appeal against the High Court decision.

The statement commented that the decision will have significant implications for Councils who routinely rely on the expertise of engineers involved in complex construction projects. 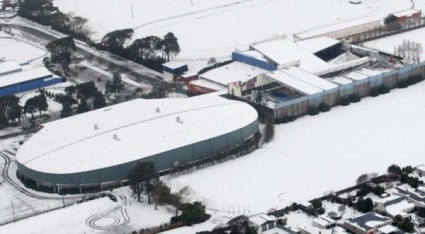 It continued "the Council noted that its officers were seen by the court to have been careful and acted responsibly but it had been let down by an administrative process" and concluded that systems and procedures have improved since 2000, when the council signed off on the roofing work, and the council does not expect a repeat of this type of problem.

Major, who was named as the second defendant in the civil case, took no part in the court proceedings.

The roof of the former Stadium Southland collapsed under heavy snow on 18th September 2010.

People were inside the building when it collapsed but escaped unharmed.

The venue's insurance company, NZI, which comes under the umbrella of IAG, paid out the stadium owners, the Southland Indoor Leisure Centre Charitable Trust, following the collapse.

The owners then built a bigger and more expensive Stadium Southland to replace the collapsed version. This opened in early 2014.

Images show Stadium Southland after the collapse of its roof.