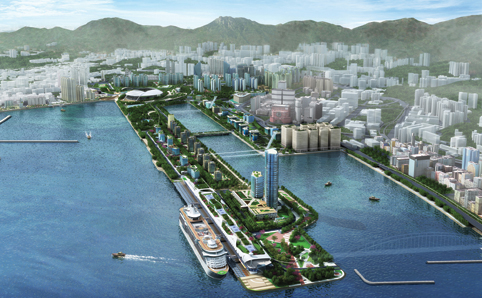 A new multi-purpose sport stadium, with a capacity of up to 50,000, is at the heart of the redevelopment of the site Hong Kongs former Kai Tak Airport.

Located on the harbourside in Kowloon, the new stadium will be at the heart of a sports hub occupying about 24 hectares of the 320-hectare site. In addition to the main stadium, the development will include a 5,000-seat public sports ground, a 3,000-seat Olympic-standard aquatic centre, 3,000-seat multi-purpose indoor arena, a water sports centre, a sports library and museum, sports promenade and community facilities, office space of at least 10,000 metres2, commercial space of at least 31,500 metres2, and public recreational facilities in a park setting.

Under consideration since 2007, in the 2011-12 Hong Government policy address, delivered by then Hong Kong Chief Executive Donald Tsang, it was stated that Government is studying financing options and mode of operation of the proposed stadium.

A subsequent study by the Home Affairs Bureau advocated a "design-build-operate" approach - design, construction, operations and maintenance under a single entity - to ensure effective delivery from designing the complex to its long-term operation.

The study also recommended that the project be financially supported by a combination of government and private financing in order to maximise efficiency and innovation.

When complete, the Kai Tek Sports Hub will be similar to, and will compete with, the Singapore Sports Hub due to open in 2014.

It is also seen as a key component in a future bid by Hong Kong to host the Olympic Games.