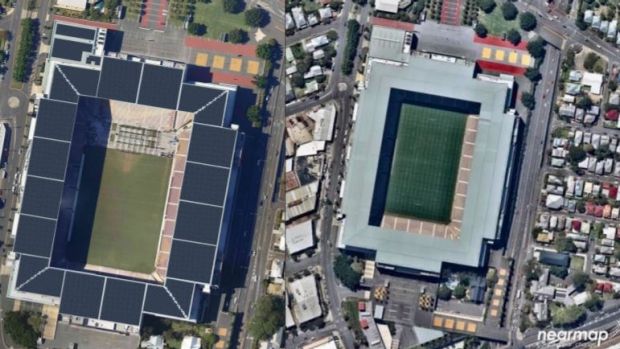 Newly released research from the University of New South Wales suggest that the installation of solar panels on major Brisbane venues including Suncorp Stadium and the Queensland Performing Arts Centre could generate electricity for 1,200 homes and save 5414 tonnes of carbon dioxide emission a year.

The solar panel research on Brisbane buildings also showed installations could save $30 million from electricity bills.

However, the impact of adding solar energy panels to commercial buildings in Brisbane is just one set of findings in research by UNSW and the Australian PV Institute. Their research also finds only about "1%" of the potential capacity of Brisbane CBD rooftops to collect solar energy is now being used and that in Queensland, 8.97% of electricity demand in met by photovoltaic cells, more than Victoria (8.62%), New South Wales (7.29%) and Tasmania (4.57%).

Dr Anna Bruce, from UNSW's School of Photovoltaic and Renewable Energy Engineering said after the boom in "residential solar" in the recent past, small to larger businesses were now examining cost savings from "localised" solar generating systems - ie on business rooftops.

Dr Bruce explained “one of the benefits - longer-term - will be that by generating more electricity locally, we will not need as much capacity in our transmission and distribution network, our electricity grid.”

Dr Bruce said researchers wanted to speak to the Queensland Government and Brisbane City Council about ways their research could help Queensland approach its ambitious target of having 50% of its energy generated by renewable energy by 2030.

Dr Bruce said in NSW, the Sydney Theatre Company, the Sydney Town Hall and tens of IKEA stores were leading the way in commercial solar.

She added “businesses that are short of roof space are looking at investing in renewable energy projects off-site.

"That's not for sustainability reasons alone. It's because they are able to save money."

In September Queensland's Energy Minister Mark Bailey confirmed the Queensland Government wanted solar panels placed on the roofs of some its buildings.

Since its opening in 2012, the Townsville RSL Stadium has operated a solar farm consisting of 1,800 solar panels which meet two-thirds of the stadium's energy requirements.

Image: Aerial view of Suncorp Stadium with an artist's impression of its roof covered with solar panels on the left.