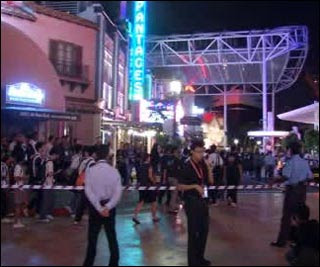 Singapore authorities have simulated a terror attack to test the emergency preparedness of the Home Team and the security teams from Resorts World Sentosa.

It was the first time that the integrated resort had been part of a large-scale exercise.

The exercise started with a suspicious package in an auditorium that no one noticed. Soon smoke filled the room and guests were evacuated.

Not long after, a second parcel exploded at the venue and three 'gunmen' stormed into the Universal Studios theme park, opening fire, and leaving scores of 'casualties'.

Security agencies were alerted and deployed to the scene.

The simulated exercise involved some 400 Resorts World staff and officers from the various Home Team agencies, including the Special Operations command team which later subdued the gunmen.

Witnessing the event was Minister in the Prime Minister's Office, Lim Swee Say, who said the exercise serves as a reminder of Singapore's ongoing battle against terrorism.

Since Resorts World Sentosa is new, authorities also took the opportunity to familiarise themselves with it. 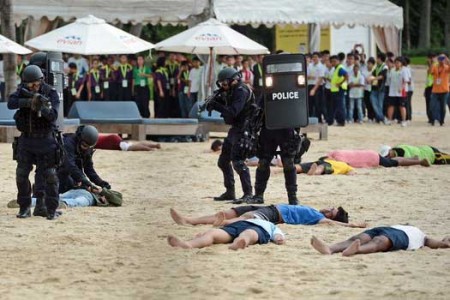 Melvin Yong, Deputy Assistant Commissioner of Police and Commander of Clementi Police Division, explained "many of the facades here may look like a concrete pillar but when our officers hid behind a pillar to avoid a gunshot, we realised it's not concrete.

"It's made of some other material that will not provide a safety shield. So the theme park does provide a very different terrain for us, a very new challenge for the police."

"And I think it's in our interest to make sure the IR staff are well trained, and well prepared to make sure that in any contingency, they are in the best position to take care of the patrons and customers within the resort."

Resorts World Sentosa, which is home to Universal Studios Singapore, attracts thousands of visitors on a daily basis.

Vice-president of Park Operations at Universal Studios Singapore, John Hallenbeck, explained that, "We try to strive for safety at all levels, and doing exercises like this helps us to refine our SOPs, helps us to understand - if something did happen, how can we react quicker."

The last time such a large-scale emergency response simulation took place was in July 2009 during Exercsie NorthStar. The exercise - conducted at 10 different locations including a shopping centre, an MRT station and the resort island of Sentosa - re-created simultaneous terror attacks similar to the Mumbai, India attack of November 2008.