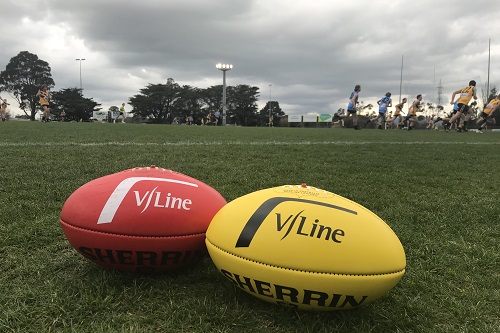 AFL Victoria has announced that AFL Goulburn Murray and Greater Shepparton City Council have been selected to host next year’s V/Line Cup.

Held annually, the V/Line Cup carnival brings together the most talented male and female regional Australian footballers to go head-to-head against the top performers in their age group.

In addition, the V/Line Cup also provides an important development pathway for talented up-and-coming umpires across Victoria, who are part of the V/Line Umpire Academy.

Since moving the V/Line Cup carnival to regional Victoria in 2015, the event has generated over $9million in economic impact to the Latrobe City Council, where the event has been held for the past four consecutive seasons.

Macri said the region was delighted to be chosen to host the state’s best Under 15 and Under 16 players and top regional umpires, advising “AFL Goulburn Murray is thrilled to be able to host the V/Line Cup carnival, which has fast become a favourite on the football calendar and an important part of the talent pathway for both umpires and players.

“We’re proud to welcome the next generation of football talent to our region, and look forward to hosting them at some of our premier sporting facilities.”

Excited at the prospect of securing this elite junior AFL event to the region, Mayor O’Keeffe stated “hosting this event is a massive coup and continues our tradition of hosting high profile AFL events in partnership with our partners AFL Victoria and AFL Goulburn Murray.

“Council strives to attract the biggest and best events to Greater Shepparton boosting employment, tourism, entertainment and liveability for our community. Our teams are working hard creating jobs, keeping business busy and the economy strong and this event will be a great showcase of this with over $2 million injected into Greater Shepparton.”

In 2018, the V/Line Cup saw more than 550 of the most talented regional footballers and umpires showcase their skills, with eight girl’s teams and 14 boy’s teams lacing up the boots in the four-day development carnival.