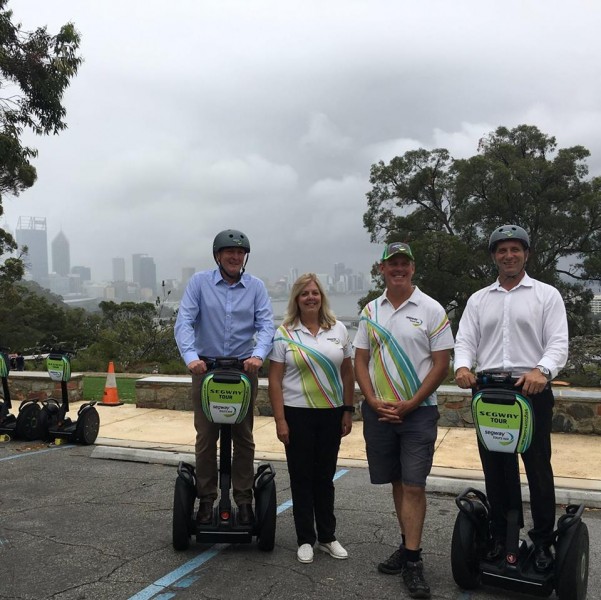 The Western Australian Government has announced that Segway tours will operate in Perth’s Kings Park and Botanic Garden, providing a boost to tourism in the heart of the city.

Kings Park - the most visited destination in Western Australian - will welcome the new tourism venture ahead of the Australia Day long weekend.

The two-year trial will be run by Segway Tours WA, which has conducted tours for 30,000 tourists in Perth, Fremantle and Rottnest Island since launching in 2013.

The Kings Park tour route will take in views of the city and Swan and Canning rivers for up to 10 kilometres, providing another unique way to enjoy the many wonderful features of the park.

Representatives from Kings Park, Segway Tours WA and the Office of Road Safety have worked together to select roads and pathways which are appropriate for this type of activity in Kings Park. All Segways will be limited to a speed of no more than 10 kilometres per hour, with some pathways restricted to five kilometres per hour.

Introducing the new attraction, Western Australian Tourism Minister Paul Papalia stated "Kings Park is a key attraction for visitors to Perth, and Segway Tours will add to the diversity of ways that tourists can experience and enjoy its unique environment.

"Significantly, the tours connect Kings Park with the Swan River and attractions within the city enabling visitors to experience Perth as part of a single tour that encompasses our impressive natural, built and cultural heritage.

"Enabling Segway Tours to operate within Kings Park supports the ongoing activation of Perth as an exciting destination, and is an important addition to the tourism product on offer for visitors to our city."

Hall stated “it is fantastic to see this new, exciting tourism experience from Segway Tours WA given the green light.

“More immersive, outdoor experiences like this, such as wave parks, heli-tours, ziplines and cable cars, are needed to continue Perth’s evolution into a unique nature-based destination attracting visitors from across Australia and the world.”

Tourism Council WA has continually advocated for the reduction of regulation which inhibits tourism operators from getting new product approved in Western Australia.

Hall added “people with new, exciting ideas for tourism experiences and attractions should be encouraged to get their ideas off the ground, rather than discouraged by lengthy and uncertain approvals processes through multiple Government departments.

“Approvals processes should be streamlined and red tape reduced to encourage further development of the State’s tourism assets.”