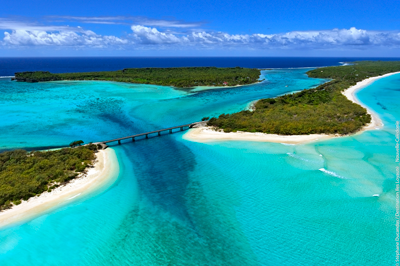 A gang of pirates armed with rifles and swords or machetes has attacked a luxury yacht carrying tourists off New Caledonia, knocking the captain to the deck and looting the boat, according to reports.

Two Australian tourists and three guides were aboard a yacht exploring a coral atoll near Ouvéa, a remote isle favoured by cruise ships, when raiders approached their boat and opened fire.

As quoted by the Daily Mail, New Caledonia Public Prosecutor Alexis Bouroz advised “a boat from Ouvéa came to meet them with seven to eight people aboard, some of them apparently armed with guns and machetes.”

Bouroz explained that the attackers fired shots in the air and at the boat before five or six pirates boarded.

Tourists were only “lightly injured” but the skipper was hit in the face and knocked to the deck.

After that, the boat was reported to have been looted while one of its engines and its electronic equipment was destroyed.

While the attack has not made the news in much of the English-speaking world, reports have been carried by numerous French-language outlets, including Paris morning newspaper Le Figaro, the longest-established national daily in France.

The prosecutor said that the incident occurred Monday afternoon near Beautemps Beaupré Island, a coral atoll north west of Ouvéa.

Tahiti-infos.com advised “two Australian tourists and three companions came to observe the underwater world with a boat from a luxury yacht, the Masteka 2, which anchored further offshore.”

A boat from Ouvéa carrying pirates then intercepted the vessel.

The site quoted an officer on the boat, Vincent Ventrella. In a statement to French-language news agency Agence France-Presse, Ventrella said the attackers had apparently commandeered a local tourist excursion boat to launch the raid.

Ventrella advised that the planned tourist visit to the coral atoll, a UNESCO World Heritage-listed tribal reserve, had been organised after a formal request to the traditional Kanak custodians.

News outlets quoted a spokesperson from Australia’s Department of Foreign Affairs and Trade (DFAT) acknowledging it was “aware of media reports that a number of Australians were involved in an incident in New Caledonia” adding: “We stand ready to offer consular assistance.”

New Caledonian authorities have reportedly identified the main suspect and issued an arrest warrant for aggravated violence, theft with violence and intimidatory behaviour endangering the public.

In a statement, the President of New Caledonia’s southern province, Sonia Backés, strongly condemned the aggression, which she said was “highly detrimental to tourism activities.”

Image shows the island of Ouvéa.