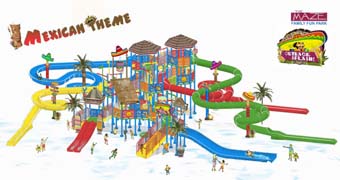 Set to be the most significant attractions development in Western Australia in decades, the waterpark will expand the existing 13 hectare amusement facilty at Bullsbrook in Perth's north-eastern suburbs.

The $1.5 million first stage - a three-storey-high children's aquatic playground with two tube slides, two flume slides, toddlers' slides, a 1,000-litre tipping bucket and a range of water cannons and interactive play features - is expected to be finished by December after getting planning approval from the City of Swan and a $250,000 grant from the Federal Government.

Claiming that it will be "Australia's biggest waterslide playground", the owners plan to have the new attraction completed by December this year.

Co-owner Phil Dixon explains "our team is ready to begin work to ensure that our guests will be splashing and sliding on Australia's largest waterslide playground by summer."

The playground is an Arihant '12a' aquatic play structure, with a Mexican theme, provided by new Arihant distributor Amusement Leisure Consultants.

The full waterpark, to be known as Outback Splash, will then be built in six stages over a 10 year period. Subsequent stages will nine waterslides, a lazy river and $5 million for food and beverage outlets. Existing facilities at The Maze will also be expanded to include nine different mazes and mini-golf.

Centerting on a 2,500metre2 timber maze, The Maze opened in 1981. In 2006, it was bought by Paul and Nicole Woodcock - operators of the successful Wanneroo Botanical Gardens and Leapfrogs Café.

Woodcock appointed his brother-in-law, Dixon, as the Park's General Manager and they eventually became partners in the business.

Two years ago, surveys of patrons found that a water park would be popular and work began on the planning, including discussions with experts around the world.

Woodcock explained "(summer) heat has always had a negative impact on the park, so adding water makes great sense and seemed like it would be a lot of fun."

One of the park's initiatives will be a water filtration system that will mean the stage-one playground will need only the same amount of water to operate as an average backyard swimming pool.

The Maze is set in natural parkland with expansive lawn areas and natural settings. It now includes seven different mazes, each with their own unique twist and challenge; a nine-hole mini-golf course; nine holes of disc golf; a giant chess set; volleyball and animal attractions of koalas, kangaroos and emus; walk-in bird and owl aviaries; cafes and F&B outlets.

For more information go to www.themaze.com.au