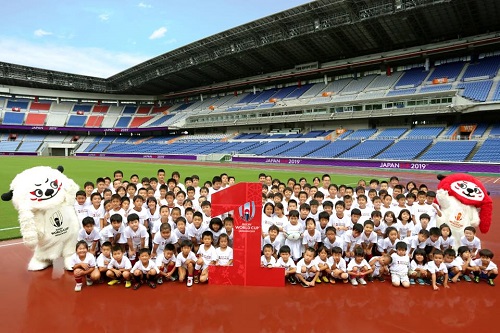 With a year to go until Japan plays Russia in the opening match of Rugby World Cup 2019, demand for official travel and hospitality packages for Asia’s first Rugby World Cup is exceeding expectations.

STH Japan, a joint-venture between JTB Corporation and Sports Travel and Hospitality (STH) Group, the exclusive official hospitality and supporter tour providers for Rugby World Cup 2019, has advised this week that demand is exceeding projections.

The supporter tour program is proving to be hugely popular with rugby fans wanting to be part of the tournament. In particular, there have been record sales from travelling fans in the UK, New Zealand, Australia and Argentina as the tournament captures the imagination of the global rugby family.

The most popular packages to date have been tours for the opening weekend, as fans guarantee their place to support their team in the pool stages, and later in the tournament the Oita quarter-finals are in high demand from English, French and Argentinian supporters. However, fans from New Zealand and Australia are backing their teams to go further as they book places for the semi-finals and final.

With official Supporter Tours sales expected to be 30% higher than original predictions, and two further sales surges expected during the November internationals and the Six Nations next year, fans are being urged to book their travel packages.

STH Japan is also bringing sports hospitality to Japan for the first time with a very positive response received from the market and sales to date exceeding expectations.

An innovative range of experiences are being delivered for the tournament. Five official hospitality options are available for fans and every package will include the best-available match ticket and high-quality hospitality experience, combining a blend of western influences and traditional Japanese 'omotenashi', or welcome.

There has been huge interest from both international and Japanese markets, especially for the Japan matches, which are almost sold out. STH Japan are operating a dedicated Webb Ellis Pavilion at Yokohama Stadium, containing 30 private suites, which sold out in record time. The facility also houses a vibrant shared dining space which has been exceptionally popular.

Japan has proven to be a popular destination to visit with 30% of hospitality purchasers coming from 39 different countries, promising a truly international atmosphere in 2019. With only one team left to be confirmed for Rugby World Cup 2019, the tournament is on track to be a very special experience.

Commenting on the demand for travel and hospitality packages, World Rugby Chief Executive Brett Gosper advised “Rugby World Cup 2019 is on track to be a very special and game-changing event. In addition to exceptional ticketing demand, the official supporter tour and hospitality offering is exceeding all expectations and underscoring our belief that Japan is the place to be in 2019.”

STH Group Chief Executive Simon Jefford added “this is an incredibly exciting time and one year to go is an important milestone for STH Japan in the lead up to the 2019 tournament. We are very proud of having the opportunity to introduce the concept of sports hospitality to Japan and, of course, provide a unique Rugby World Cup hospitality experience in Asia for visiting international guests.

“We’re also very encouraged by the commitment shown by travelling fans to support their teams at Rugby World Cup 2019. Supporters are seeing this as the perfect opportunity to visit Japan and with teams moving into the final stages of preparation fans are guaranteeing their place through the travel programme. Our OTAs are reporting record levels of enquiries and sales, which is fantastic for the tournament.”

Fans are urged to buy official to guarantee their place at rugby’s biggest event. A list of the official travel agents can be found at www.rugbyworldcup.com/buy-official

Image: Young fans mark the one year countdown to the opening match of Rugby World Cup 2019.