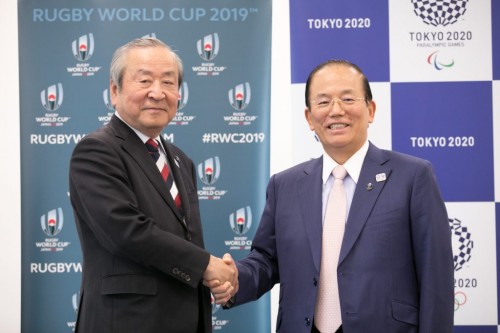 The Tokyo 2020 Organising Committee (Tokyo 2020) and the Rugby World Cup 2019 (RWC ’19) Organising Committee have this week agreed a landmark collaboration agreement under which the two organisations will exchange knowledge and resources in preparing for and managing major sporting events, including security measures, transport infrastructure, venue management, volunteer and anti-doping programs.

Aiming to ensure the showpiece events leave a lasting legacy for Japan, the collaboration aims to maximise benefits and impacts for their respective events – two of the world’s biggest – being hosted by Japan over the next three years.

Commenting on the partnership, John Coates, Vice-President of the International Olympic Committee (IOC) and Chairman of the IOC Coordination for the Games of the XXXII Olympiad Tokyo 2020, stated “the attention of the sporting world is already focused on Tokyo and Japan as they prepare to host the 2019 Rugby World Cup and Olympic Games in 2020.

“Just as there are many significant opportunities and benefits that will accrue to the host country from these events, there will be synergies and benefits, such as in the training of volunteers, from the two Organising Committees working closely together in the preparation years.”

“There are many synergies between the hosting of these two events, from technology to venues, and from security arrangements to volunteer training. We look forward to working with all parties to deliver on this opportunity.

“Rugby is a sport where a strong common vision, shared values and teamwork underpin success and I am sure that this agreement will be great for Rugby World Cup, great for the Olympic Games and great for the people of Japan.

The organisers expect the agreement between Rugby World Cup 2019 and Tokyo 2020 to maximise the combined legacy of the events for Japan, for the Asian region and for international sport.

Improved sporting facilities, as well as enhanced security systems, transport infrastructure and what is hoped will be an emerging volunteer culture, will continue to benefit Japanese society long after the two events are over, and aim to renew Japan’s international reputation as an experienced sporting event host.