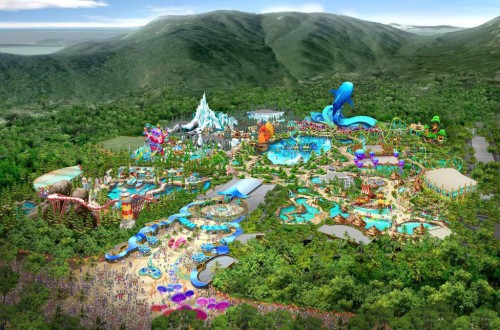 After three years of construction, the first of 10 theme parks planned for a 800 hectare resort billed as the 'Orlando of China', is expected to open later this year.

The $2-billion marine-based Chimelong Ocean Kingdom theme park on Hengqin Island in China is to be connected by ferry to Hong Kong and to adjacent region of Macau by bridge.

The Chimelong Group already operate the Chimelong Paradise theme park and waterpark, Chinas most visited attractions, in the nearby city of Guangzhou, that also includes a safari park, crocodile farm and hotels.

Ocean Kingdom, built on reclaimed land that was once an oyster bed in the South China Sea, is to feature nine water-themed lands designed by PGAV Destinations, a St. Louis-based firm that has created theme park attractions for Universal Studios, Six Flags, SeaWorld and Busch Gardens.

Plans call for Ocean Kingdom's signature ride to be a parrot-themed B&M winged coaster with the working title of Flying Over the Rainforest. The park also is expected to feature a pair of water-centric roller coasters by Mack Rides similar to Atlantica and Poseidon at Europa-Park in Germany. A Mack dark ride has also been announced.

An artist's rendering of Ocean Kingdom shows a 60 metre-tall whale shark icon hovering over a central lagoon expected to host a nighttime spectacular.