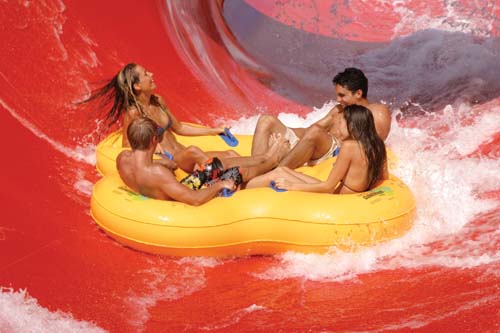 Asia's theme and water parks led a global rise in attendances with a 5.8% in annual attendances in 2012 – with visitation rising to 108.7 million attendances.

Having crossed the 100 million mark in attendance for the first time in 2011, Asia now represents more than a third of the global visitor attractions market with Asia starting to pull ahead of traditional market leader North America.

Robinett also highlighted that the top ten global theme and water park operators had performed particularly well, experiencing a 6.7% rise in visits during the year.

"Big gainers for the year include Universal Studios Japan showing an impressive 14% jump in attendance with 9.7 million visits on the back of Universal Wonderland; Hong Kong Disneyland (13.6% increase) with the Grizzly Gulch themed zone opening, and Soncheng Park in Hangzhou (14.2% increase) which also opened a large new attraction zone."

"As a driver of global tourism, the mainland Chinese tourist is fast becoming the most sought-after visitor in the world, and will continue to be so for many years to come. This vast market sector is still at the very early stages of growth ... (and) 10 years from now all numbers will be significantly higher."

Waterparks
Explaining waterpark attendances, Robinett referred forecasts in last year's Theme Index that the industry in Asia would begin to outpace the industry in North America, stating that in the new report "(our) figures show that ... Asian attendance totals have for the first time surpassed those of North America.

"The popular indoor/outdoor facilities extend the season and provide more control over the environment.

"Asians won't get into the water unless it is very warm.

"The water park experience in the US is very family oriented, kid-oriented. But in Asia, the typical water park visitors are young adults, often on a group outing: it's a day out with work colleagues, fellow students, or friends. There’s something of a crossover with the culture of spas and hot springs.

The Themed Entertainment Association, in partnership with the economics practice at AECOM, a global provider of technical-professional and management-support services, has released the 2012 Theme Park and Museum Index. The document shows attendance figures and trends at theme and waterparks in North America, Latin America, Europe and Asia-Pacific, as well as museum attendance figures and trends in North America, Europe and Asia-Pacific. Most of the top 25 theme parks in the world benefited from a 2% to 6% increase in attendance, while Asian water park attendance has surpassed North American water park attendance.

Click here to read the full report released by the Economics practice at AECOM (formerly Economics Research Associates) and the TEA.