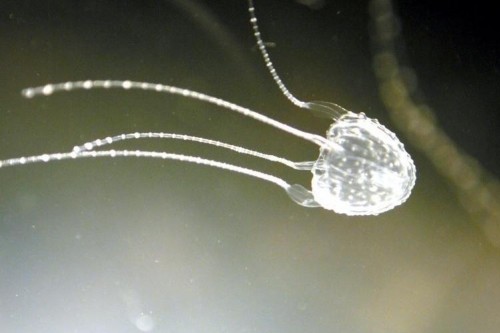 An early warning system for Irukandji jellyfish will be tested by Commonwealth Scientific and Industrial Research Organisation (CSIRO) scientists off Palm Cove, north of Cairns, from next week.

Dr Gershwin told the ABC that she is confident the modelling will achieve a high level of accuracy and hopes the warning system will be operational by the start of the next stinger season, stating "we all want our beautiful beaches back, you know we want to be able to swim with a reasonable level of confidence.

"We do believe that the forecast is highly likely to be spot on, but you don't know til you do it."

Dr Gershwin says the warning system will cover all beaches and major islands from the Fraser Coast north to Cape York.

Irukandji jellyfish are small and extremely venomous jellyfish that inhabit marine waters of Australia and which are able to fire their stingers into their victim, causing symptoms collectively known as Irukandji syndrome.

Irukandji syndrome is produced by a small amount of venom and induces excruciating muscle cramps in the arms and legs, severe pain in the back and kidneys, a burning sensation of the skin and face, headaches, nausea, restlessness, sweating, vomiting, an increase in heart rate and blood pressure, and psychological phenomena such as the feeling of impending doom.