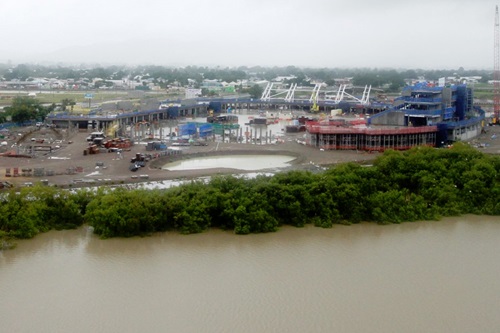 With Townsville and surrounding communities having last week battled severe flooding, the new North Queensland Stadium site has been put to the test along the banks of Ross River.

The Queensland Department of Housing and Public Works, leading the delivery of the new stadium, has advised that while the site was affected by some water logging as a result of the extreme rainfall event it did not experience overland flooding.

The Department advised “100,000m3 of fill was used to raise the building platform above the Q100 flood level before construction commenced.”

Builder Watpac kept staff on site during the floods but no construction activity took place.

Construction of the new Stadium is expected to be completed in time for the 2020 NRL season.

Meanwhile, the Townsville Hockey Association has advised that it has received numerous offers of support for the rebuilding of the flooded Townsville Hockey facility while child friendly spaces have been set up at 1300SMILES Stadium and Townsville Brothers Football Club to help families impacted by flooding.