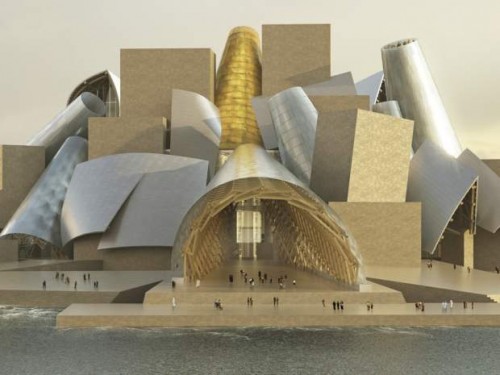 The Guggenheim Foundation has admitted that work has still not started on its new museum at Abu Dhabi’s Saadiyat Island.

While other museums in Abu Dhabi’s cultural zone approach completion, no progress has been made on the Guggenheim Abu Dhabi project since 2011, when the 1,400 concrete piles were poured.

Unveiled in a fanfare of publicity in 2006, the Guggenheim Abu Dhabi was intended, along the Louvre Abu Dhabi and the Zayed National Museum, to help establish the Emirate as a major cultural destination.

Designed by respected architect Frank Gehry and set to cost an estimated US$200 million, the 42,000 metre2 building was designed as a cluster of galleries in varying shapes and sizes. Its opening date was first scheduled to open in 2015, before that date was changed to 2017.

According to Abu Dhabi’s Tourism Development Investment Corporation (TDIC) – the government authority responsible for building the cultural institutions on Saadiyat Island – a timetable for the project will be revealed once a contractor is in place.

Without a contractor, neither the museum nor the TDIC are currently providing an expected opening date. 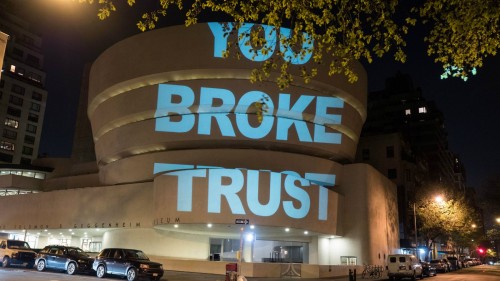 Referring to the 2011 works, a TDIC spokesperson told the Dezeen website “preparatory structural work has been completed for Guggenheim Abu Dhabi.

"Once the main construction tender is awarded, further details on the project's timeline will be communicated.”

Since the project was originally proposed, Abu Dhabi has had to endure the GFC and fluctuating oil prices, but those circumstances have not halted the other cultural projects on Saadiyat Island.

However, mirroring concerns about the rights and conditions of migrant workers constructing FIFA World Cup venues in Qatar, high profile artists have pressurised the Guggenheim Foundation over migrant worker conditions on the project.

In 2011, 130 artists, curators and writers signed a petition demanding that working conditions improve at the project, prompting ongoing negotiations with the Guggenheim Foundation.

In April, after the Foundation broke of negotiations with the artist-activist group Global Ultra Luxury Faction (GULF), the group illuminated the exterior of New York’s Guggenheim Museum with a series of protest messages.

Echoing an innovative earlier light project at the Guggenheim, the protest projected phrases suchas ‘Ultra Luxury Art/Ultra Low Wages’, ‘Every Day is May Day’ and, in a video loop featuring the faces and names of trustee members, the statement ‘You Broke Trust’.

Set to open later this year the Louvre Abu Dhabi will be the first overseas branch of the historic Paris museum. 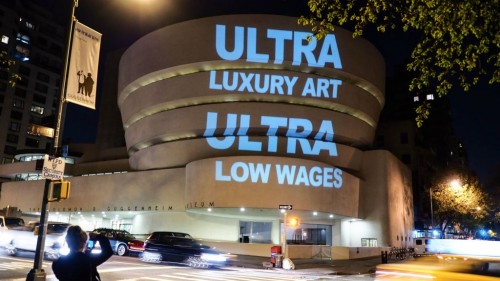 The complete Saadiyat Island cultural precinct is expected to eventually offer a range of cultural attractions by star architects, including a British Museum spinoff by Foster + Partners, a performing arts centre by Zaha Hadid and a maritime museum by Tadao Ando.

The Guggenheim and Louvre are among the growing number of major cultural institutions expanding to new locations, including London's V&A and New York's MoMA.

The Guggenheim Museum – based in the Frank Lloyd Wright-designed building in New York – opened its first outpost in Bilbao in 1997 and also plans to open a museum in the Finnish capital Helsinki.

Images: The Frank Gehry designed Guggenheim Abu Dhabi (top) and protest messages projected on the facade of the Guggenheim Museum in New York (middle and below).