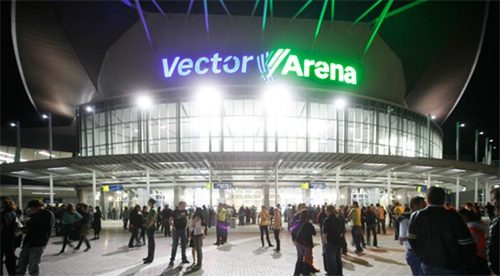 Bruce Mactaggart and Stuart Clumpas believe the Arena, which has transformed New Zealand’s entertainment industry over the last three years, has even more potential as the lynchpin of the New Zealand concert and event industry.

The 12,000 seat, multi-purpose Vector Arena, which since it opened has hosted more than 200 events and welcomed more than 1.2 million visitors through its doors, is earmarked by the new owners for an increasingly diverse array of events.

Mactaggart had a lead role in Vector Arena’s design, construction and opening, during which time he was Chief Executive. Since then he has been the Arena’s Executive Chairman. Mactaggart is also Executive Director of the Immersion Edutainment Group, which originally conceived Walking with Dinosaurs – The Live Experience, which has become one of the most successful global touring shows in history.

Clumpas will be familiar to those in the international music scene from his 22 years as a leading European concert promoter, before selling his UK business and moving to New Zealand in 2001. He created and produced two of the major UK pop festivals, the legendary T In The Park and the V Festivals in association with Sir Richard Branson. A venue operator in the rock and pop world since 1984, Clumpas’ best known venture was Glasgow’s King Tuts Wah Wah Hut, where super group Oasis were discovered.

As Mactaggart explains, “before Vector Arena opened in Auckland people often had to travel to Melbourne or Sydney to see their favourite artists or shows. Now the Arena has become one of the must-play venues on the world touring circuit and it hasn’t even begun to reach its full potential yet.

“Both Stuart and I passionately believe in Vector Arena, and believe that it has an even more meaningful role to play in music, arts and culture in New Zealand in future years. Importantly, we didn’t want to potentially see the Arena pass into foreign ownership,” he says.

The new owners are committed to taking Vector Arena’s success even further, working towards more big production, concert activity and locally-focused community and sporting events. Announcements about world-class shows never seen before in New Zealand are expected in coming months.

Clumpas adds “we’ve both chosen to emigrate to and live in New Zealand and want to make a meaningful contribution to the country that we call home. Both Bruce and I believe that our new role in this venue is well-founded - we have the international experience and connections, but live and work locally. We are positive about the role that Vector Arena has to play in the New Zealand entertainment scene, and confident we can make it an even greater success for all of New Zealand.

Bruce Mactaggart has mainly lived in New Zealand with his family since 2004, when he moved to the country here from Australia where he had been General Manager at Melbourne and Olympic Parks.

Mactaggart began at Vector Arena’s Chief Executive prior to its design and saw it through to its opening. Since then Mactaggart has been Vector Arena’s Executive Chairman, with a highlight being the nomination of Vector Arena as the Best Arena in the World at the annual Pollstar International Touring Awards in Los Angeles in January 2008.

Mactaggart also created Immersion Edutainment Group in 2007 to pursue an idea he had for a completely new concept in live entertainment, which combines live theatre with education and so provides entertainment for the whole family.

The result was Walking with Dinosaurs – The Live Experience, during which an Indiana Jones-type character tells the story of the creature’s evolution and ultimate extinction through 15 stunningly realistic dinosaurs, including a T. Rex that is 23 metres from nose to tail. It is now one of the most successful shows in history.

Prior to his involvement in the entertainment industry Mactaggart was the Managing Director of Bond Miles Coulter, an integrated marketing, advertising and media agency in Melbourne, and General Manager of Marketing and Sales, as well as Investment Fund and Insurance Operations at Australian Unity/Manchester Unity.

Stuart Clumpas moved to New Zealand with his family from Scotland nine years ago. But it was while he was gaining his MA (Hons) in Accounting and Economics from Dundee University that he got his start in the music business. As entertainment convener he booked such emerging talent in the 1980s as The Pretenders, Def Leppard and UB40

Over the next 20 years he built up DF concerts, originally Dance Factory Concerts, to become Scotland’s main concert promoter and event producer, who promote shows from the latest happening act in a small bar to the likes of AC/DC at Stadiums. Included in his portfolio were two of the major UK pop festivals; T In The Park, now the largest outdoor event in Scotland which won Sponsorship of the Year Awards at the UK Media Week Awards two years in a row, and the two V Festivals in England, where the sponsor is Richard Branson’s Virgin Group.

Since taking a break from the mainstream music industry in 2001, Stuart has been involved in NZ projects as diverse as PilotExpo, (an aviation expo at Ardmore Airport) the Transmission Room (a combined licensed live TV studio and events space in Auckland), and mentoring a concert promotions business which brought Snow Patrol and Muse, among others, to New Zealand.

Vector Arena is a public/private partnership with Auckland City Council.

For more information go to www.vectorarena.co.nz