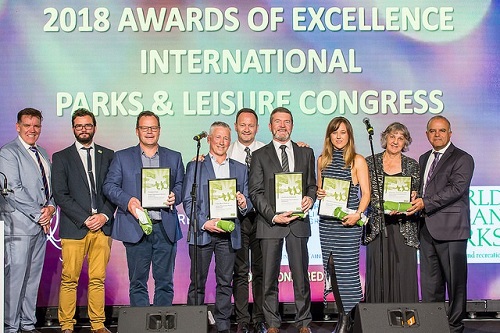 Last week’s International Parks and Leisure Congress in Melbourne saw the unveiling of the 2018/19 winners of the Green Flag Award for parks and green spaces.

Hosted between 14th and 17th October by Parks and Leisure Australia (PLA) and World Urban Parks, the International Parks and Leisure Congress (IPLC) showcased the ‘Future of Spaces and Places in Cities’ through a unique program of international and Australian speakers backed up by a series of organised technical tours around Melbourne’s green spaces.

The Congress was attended by over 600 delegates.

Commenting on the Green Flag Award announcements, PLA Chief Executive Mark Band stated "it's been a pleasure for PLA to give all seven parks the recognition and appreciation they deserve for their hard work and determination.

“The Green Flag Award is expanding every year and my team at Parks and Leisure Australia are here to support new applications from within our country, and we are really looking forward to seeing the scheme grow here too."

Now in its 22nd year, the Green Flag Award for parks and green spaces is truly international, now operating in 12 countries cross including Europe, the Middle East and Australasia.

“I was particularly pleased to see applications from Kwinana and Bendigo that met the standards, as parks and green spaces in smaller authorities, not just the major cities, are especially important to the communities they serve"

The Green Flag Award scheme is an annual accreditation scheme in which organisations managing parks and green spaces apply and then have to be reaccredited each year.

Judged by independent parks professionals, the process demonstrates to the sector and to the communities that use them that the managing authority are maintaining high standards through the schemes internationally recognised criteria.

Parks and Leisure Australia recently took over the administration of the Green Flag Award scheme in Australia.