Moree Artesian Aquatic Centre open, but not yet fully operational 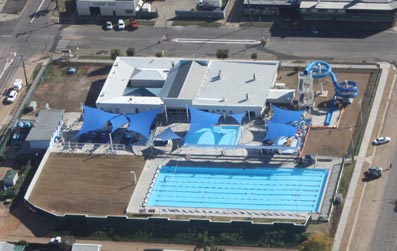 While having been officially opened in September, the Moree Artesian Aquatic Centre (MAAC) is not expected to be fully operational until March next year.

The Moree Plains Shire Council is now awaiting NSW Government approval to establish a new management structure for the Centre, in order for the gym to become operational and for the wellness centre to be able to provide its full services.

Although officially open, there have been a number on ongoing maintenance and site completion issues the Council has had to address.

Acting General Manager Ian Dinham said the Council was completing designs to reduce the wind impact around the heated pools while more change cubicles will be installed to act as a windbreak and also provide places for people to store their clothing and belongings.

Meanwhile, some Moree residents have complained that the entry price for the wellness centre is too high.

However, Dinham believes the entry cost is quite reasonable when compared to other similar facilities, stating "this is a five star, $7 million facility and it is streets ahead of any other facility in Australia, so the pricing is very reasonable."

Final costs the refurbishment of MAAC are expected to total $7.9 million, in excess of the original budget of 2010 which anticipated costs of $6.25 million. However, this cost did not budget for the cost of the waterslide or the fit-out of the main building.

The Council had originally planned for the kiosk, wellness centre and gym to be run by private enterprise.

However, they received no applications for tender by the time tenders closed in late 2010 with the Council now resolving to run these facilities themselves through a board of management.

The renovated MAAC now offers a new FINA standard 50 metre Olympic pool, two hot artesian pools which are both naturally heated to temperatures between 38 and 40 degrees Celsius; a program pool which is heated to 30 degrees Celsius making it ideal for hydrotherapy, aqua aerobics and learn-to-swim classes; as splash pad and interactive toddlers pool and a 10 metre high waterslide.