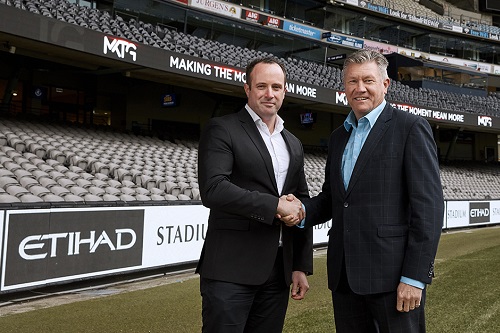 Sports and lifestyle marketing and operations business MKTG has announced it has signed a six-year deal with Melbourne Stadiums Limited (MSL) which see the Dentsu Aegis Network division take ownership of all connected technology at the Etihad Stadium, including 1,500 IPTV screens, and the in-stadium connectivity including the stadium app and assets associated with the Wi-Fi network.

The announcement coincides with the AFL’s acquisition of the venue, a $225 million grant from the Victorian Government for the redevelopment of the stadium and surrounding precincts and a new naming rights partnership with Disney which will see the venue become the Marvel Stadium from 1st October.

The new partnership complements MKTG’s existing rights management of the LED signage across the perimeter of the venue and main interactive screens for the AFL. It extends across all fixtured events including AFL, Big Bash League, Football Federation Australia, A-League, plus additional entertainment events such as US Basketball showcases and concerts.

As a partner of the venue, MKTG will offer a fully integrated connected experience for brands and clubs operating in the stadium, demonstrating their leadership in stadium innovation alongside their existing work in advancing the fan experience at the MCG.

In addition to the partnership, MKTG is also making a significant investment in upgrading the back of house infrastructure for the stadium, enhancing control of the technology to position Etihad as one of the best digitally connected stadiums in the country. The upgrade will deliver full connectivity of all digital assets across the stadium from one central point, enabling seamless deployment of campaigns and meeting the future needs of the stadium, clubs and advertisers.

Introducing the partnership, Etihad Stadium Chief Executive, Michael Green stated “this is the first time that one business has taken full ownership of our connected assets, so it was really important for us to work with a reputable partner that completely understands the end-to-end needs of a sporting and entertainment stadium.

“After many years working in a strategic partnership with MKTG, I am confident that this is the right appointment and that we will see huge innovation in the in-stadium experience at Etihad as a result.”

Matt Connell, MKTG National Managing Director added “this is a significant milestone for our business, and along with our partnership with the MCG and some of Australia’s premier sporting codes, we are really in a position to cement our reputation of delivering some of the country’s - and the world’s - most innovative in-stadium experiences.”