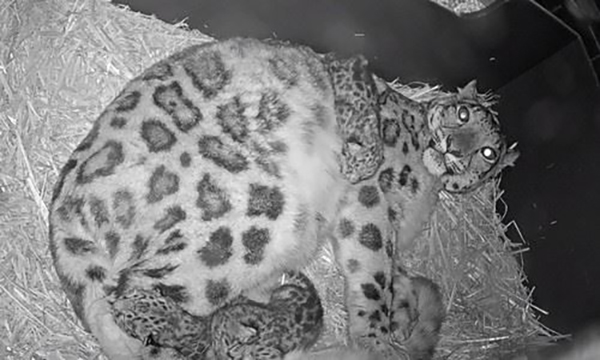 Melbourne Zoo Carnivores Life Sciences Manager Justin Valentine says the cubs are feeding well and three year-old Miska, who arrived at the zoo in 2017, is proving herself to be a brilliant mother.

Valentine notes “it’s going amazingly well. Mum Miska has been so naturally maternal. She is a first- time mum, so we weren’t sure how she would take to mothering, but she has been just beautiful."

“The sex of the cubs isn't yet known, and they have not been named.

"Like any infant, they are hungry little feeding machines, and seem to be putting on weight steadily so far. It is really exciting. To see them born healthy, and watch Mum being so vigilant and protective of them is so rewarding for the whole team.”

Valentine advised that as is normal in the wild, the cubs will stay close to their mum in her den over coming months adding “the priority now is to leave them with mum to bond and grow strong. For the next few months we will be as hands-off as possible. They will stay in their den with mum until we provide them more access to the snow leopard exhibit.”

Melbourne Zoo's director Michelle Bruggeman says the entire Zoo team is thrilled by the births “it is a really exciting time for visitors and members to be part of this journey and connected to it. Visitors can come and watch these youngsters feed from Miska and be playful and interact together. So it is a great time to visit Melbourne Zoo."

Melbourne Zoo is inviting Zoo members and visitors to view the nesting den where Miska and her cubs are living via a live ‘Cub Cam’ camera, situated at the snow leopard exhibit in Melbourne Zoo’s Carnivores Trail precinct. 'Cub Cam' will feature live footage of the cubs feeding, sleeping and snuggling up to their mum.

Snow leopards are among the world's most elusive and solitary animals and are classified as vulnerable in the wild, where they live in harsh mountain environments in countries including India, Nepal, China, Pakistan and Afghanistan.

Threats faced by snow leopards in the wild include poaching and habitat loss due to mining developments.

Zoos Victoria contributes to the conservation of snow leopards in the wild by helping to fund conservation programs in local communities. Zoos Victoria awarded grants to the Nomadic Guardians Foundation in 2018 and again in 2020. The Foundation works to protect snow leopards in the wild while also helping local communities earn a living from farming livestock.