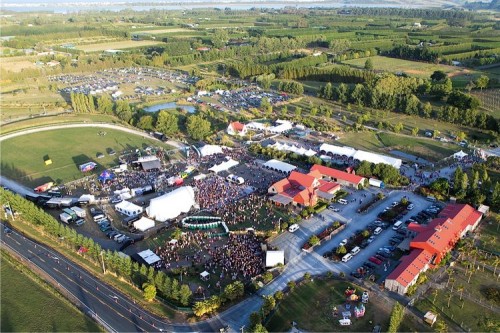 The land and buildings housing one of the biggest hospitality and tourism operations in the Greater Auckland region has been placed on the market for sale.

Matakana Country Park was developed by entrepreneur John Baker in the early 2000s. His vision for the multi-pronged destination was seeded while walking through the Butchart Gardens on Vancouver Island.

The freehold 17.97 hectare property sits at the axis route separating the affluent holiday-home enclave of Omaha Beach and its rustic beach and Department of Conservation park neighbour Tawharanui to the south, with the coastal destinations of Whangateau, Leigh, and Pakiri to the north.

The venue opened with just one restaurant, a playground for young children, and a purpose built large rustic barn-like complex which hosted a weekend arts and crafts market.

Since those humble beginnings, Matakana Country Park has continually grown and expanded its range of attractions and offerings to the public - to the point where it is now one of the biggest operators of its type in the Auckland catchment area.

Food and beverage outlets within the setting include: hospitality establishment The Stables Restaurant - formerly known as RD6 - used for hosting large functions and group bookings, the neighbouring blacksmith-themed Smiths Bar, and the ‘coffee and muffin’ style Brambles Café.

The property at 1151 Leigh Road has now been placed on the market for sale by tender through Bayleys in the North. The listing consists of eight separate parcels of freehold land - of which seven can be purchased either individually, in any combination, or as one unified portfolio.

Bayleys in the North Director Mark Macky said the Matakana Country Park was not only the biggest tourism destination of its kind in the district, but also offered huge potential to build on the existing infrastructure and attractions. Under Auckland Council’s Unitary Plan, the land at 1151 Leigh Road is zoned mixed rural and has a Matakana 2 Precinct overlay to it - allowing for current consented commercial expansion

Combined, the multiple tenancies - all on different lease terms and conditions - generate an annual gross income of $245,869. Additional revenue from functions and events booked at the venue is forecast to be $99,482 in the coming 12 months.

Macky advised “Matakana Country Park benefits from being a vertically integrated tourism and hospitality venue - servicing a broad range of target markets ... ranging from the local population utilising its food and beverage entities on a regular basis, through to visitors to the region accessing the retail outlets, and bookings from the substantial wedding and corporate markets,” Mr Macky said.

“The park has a ‘working’ church within its grounds - enabling weddings to be conducted on a sanctified premises, with guests then walking a mere 100 metres to one of a handful of wedding function locations… ranging from a licensed restaurant and function venue through to the rustic yet modernised high-beam barn.”

Fellow Bayleys in the North salesperson Gary Caldwell said that as part of Matakana Country Park’s on-going emergence as a regional tourism and hospitality hub, the venue’s popularity had grown its reputation as a summer outdoor music venue - regularly attracting crowds of around 5,000 to concerts for some five years now.

Among the international and local acts to have performed at Matakana Country Park are: Pat Benatar, America, Starship, 10CC, Lynyrd Skynryd, Six60, Shapeshifter, Shihad and Gin Wigmore. Canadian rocker Bryan Adams is booked in for a concert at Matakana this summer, as is popular New Zealand artist Dave Dobbyn.

Caldwell advised “again, the food and beverage operations within the park - and indeed the wider Matakana region - are completely booked out before and after these events. Likewise with both commercial accommodation providers and private individuals renting out their holiday homes when these events take place.

“The park has been a major economic engine for the area. From the lifespan of any business, you could say Matakana Country Park is still only in its teenage years and there’s still plenty of growing left - particularly along the lines of the existing undeveloped consented operations.”

Caldwell said the land and buildings package was easily the most diverse property the agency had ever listed in the region.

“With so many broad tenancies, revenue streams, and attractions - not to mention the consented commercial development opportunities which can be built around the existing infrastructure - Matakana Country Park could easily become an amazing Kiwi fun park for all the family.”

“Matakana Country Park was born through the vision of founder John Baker . and is now ready for another visionary entrepreneur to take it to the next level Kiwi-style.”

Macky said the greater Matakana region had undergone phenomenal growth over the past two decades - evidenced by:

• The incredible expansion of the main township - which now replicates an upmarket Auckland suburb on the weekends
• The numerous boutique primary producers now growing or making everything from buffalo cheese and blueberries through to oysters and craft beer
• More than 1000 hectares of land in and around Warkworth zoned for future urban use under the Auckland Unitary Plan
• The on-going residential development happening at Omaha Beach, Point Wells, Snells Beach, and other settlements around the Mahurangi Peninsula.

Macky concluded “one of the key attractions of Matakana for many Aucklanders is the valley’s easy accessibility - being less than an hour’s drive from the harbour bridge on an average day. This makes the area a sought-after holiday home destination, and ideal for hosting the likes of weddings and corporate retreats - all of which are the domain of Matakana Country Park.

“Visitor numbers are forecast to increase with the expansion of State Highway One into a four-lane motorway running from Johnstone’s Hill tunnel overlooking Puhoi through to just north of Warkworth - scheduled to open in 2021.

“In addition, the route for the State Highway One to Matakana link road is about to be announced. This is also due for completion in 2021, and will also cut down travelling time to the area from Auckland.”

The property is for sale by tender, with tenders closing on 7th December.

For more information go to www.bayleys.co.nz