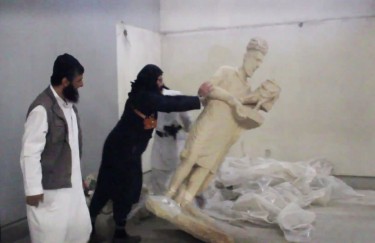 Islamic State has released a video showing militants armed with sledgehammers and jackhammers destroying priceless ancient artefacts in the Iraqi city of Mosul.

Experts and officials compared the destruction to the 2001 demolition of the Bamiyan Buddhas in Afghanistan by the Taliban.

Video showed the extremists knocking statues off their plinths and rampaging through the museum's collection, which included artefacts from the Assyrian and Hellenistic periods.

It also showed them using a jackhammer to deface an imposing granite Assyrian winged bull at the Nergal Gate in Mosul.

The video showed a bearded militant speaking to the camera, stating "Muslims, these artefacts behind me are idols for people from ancient times who worshipped them instead of God.

"The so-called Assyrians, Akkadians and other peoples had gods for the rain, for farming, for war ... and they tried to get closer to them with offerings.

"The prophet removed and buried the idols in Mecca with his blessed hands," he added, referring to the Muslim prophet Mohammed.

The artefacts destroyed were from the Assyrian era and from the ancient city of Hatra, which lies in the desert about 100 kilometres south-west of Mosul.

In a statement Bokova opined "this attack is far more than a cultural tragedy - this is also a security issue as it fuels sectarianism, violent extremism and conflict in Iraq."

Earlier this month, the United Nations adopted a resolution to curb trafficking in looted antiquities from Iraq and Syria, which have been a source of funding for IS.

Referring to the destroyed artefacts in Mosul, the man appearing in the video said "even if they are worth billions of dollars, we don't care".

In his Conflict Antiquities blog, Dr Samuel Hardy, an archaeologist and criminologist, argued the jihadists were only destroying the bulky pieces that could not be smuggled out of the country.

Dr Hardy wrote "all this video really shows is that they are willing to destroy things that they can't ship out and sell off."