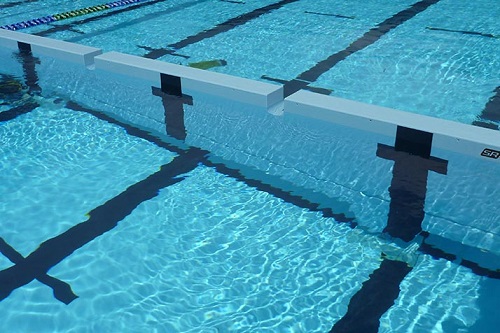 Looking to manage its aquatic space more efficiently, in May last year the Cockburn ARC took the decision to install an innovative S.R.Smith SwimWall, a decision that has had a dramatic impact on the pool’s efficiency during summer.

With nine water areas, three waterslides, a six court stadium, three group fitness studios and a huge health club space, Cockburn ARC is one of the world’s leading aquatic, recreation and sport facilities. With its first year operations seeing a higher than expected demand on the aquatic facility, the management at the Cockburn ARC looked into options to improve the efficiency of the use of space in the pools.

As a result of their investigations, specialists S.R.Smith were contracted to install a SwimWall Systems™ structure in the outdoor 50 metre pool.

S.R.Smith National Sales Manager, Jeremy Smith explains “a swim wall is an inflatable structure that is permanently fixed to the bottom of the 50 metre pool.

“By filling the wall with air, it moves into a vertical position forming a wall that is designed to fit around lane ropes, and splits the pool in half.  It only takes a couple of minutes to change the configuration. S.R.Smith SwimWalls can be customised to segment a swimming pool into multiple smaller areas in order to maximise pool space for a variety of aquatic activities.”

The installation of the system has allowed Cockburn ARC to configure the 50 metre pool in a number of ways:

• Splitting the pool in half and providing the equivalent of two 25 metre pools
• Inflating the swim wall to just half of the pool so that four lanes remain as 50 metres, and four as 25 metre lanes, and
• Deflating the wall so that the pool remains an all lane 50 metre pool.

Smith added “following the installation Cockburn ARC have been experiencing incredible benefits during the summer months.

“The swim wall has allowed them to accommodate recreation swimmers, inflatables and lap lane swimmers all at the same time. It’s also allowed them to have the indoor 25 metre set up more often in the more desirable eignt lane configuration which means lane ropes align with the pool markings.”

Cockburn ARC which opened in May 2017, was originally designed with a full-sized moveable boom in the original plans which was then removed due to budget constraints. Even when scaled down to a SwimWall built into the pool shell, the structure was then removed from the project entirely.

However, Smith advised “due to the high patronage upon opening, we were asked to install the retro fit SwimWall.

“We completed the project over three days in May with minimal downtime and impact to pool programming.”

From a technical viewpoint the S.R. Smith SwimWall is simple, efficient and effective. From the pool deck, air is pumped into the Australian-made SwimWall which causes it to move into a vertical position within seconds. Lane lines can remain in place during the process. A large stainless steel pin secures the SwimWall to a locking mechanism on the pool wall. To lower the wall the pin is retracted, the SwimWall is gently pushed to one side, and air is replaced with water. The SwimWall moves to the pool floor where it remains when not in use.

“They allow more swimming pool patrons in the pool at the same time. Wall sections can span the entire width of a pool, effectively doubling the number of swim lanes, or can section off virtually any area of the pool to create space for a wide variety of aquatic activity.”

Images: The SwimWall installed in the 50 metre outdoor pool at the Cockburn ARC (top) and the facility's 50 metre pool (middle).