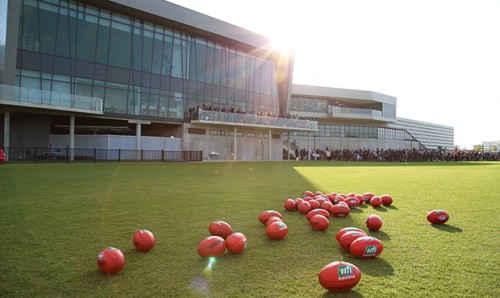 The recently opened Cockburn ARC has been acknowledged as the Best Public Use Building (Over $20 million) at the 2017 Western Australian Master Builders-Bankwest Excellence in Construction awards.

With the Cockburn ARC, also housing the Fremantle Dockers Football Club’s elite training and administration facility, was acknowledged as the Best Public Use Building (Over $20 million) at the Master Builders-Bankwest Excellence in Construction awards held at the Perth Convention Centre on Saturday night.

The Club acknowledged the efforts of Multiplex Construction and the project team that delivered the state-of-the-art facility for the City of Cockburn and the sport.

Fremantle Chief Executive Steve Rosich stated “alongside the City of Cockburn, we were very fortunate to have had the best construction company in Multiplex build the facility, as well as the team they assembled to deliver it.

“Not only did they receive the 2017 Best Public Use Building (Over $20million) but they also took out the prestigious Best 2017 Project award for their work on Crown Towers, so a big congratulations to the team at Multiplex.

“We would also like to acknowledge NS Projects and Sandover Pinder and DWP Suters, who were pivotal in delivering the project.”

In a message on LinkedIn, Brad Paatsch, the Fremantle's former General Manager of Strategic Projects and now Chief Operating Officer at the new Perth Stadium, wrote “a big congratulations to all involved in the Cockburn Community and Elite Training Facility for winning best public use building over $20 million at the Master Builders Awards last night.

“Great to be involved with a great team delivering a great project.”

The Awards have been established as the major commercial/industrial awards in Western Australia since their introduction in 1989, seeing Western Australia’s best commercial projects completed over the past 12 months compete in a range of building categories.