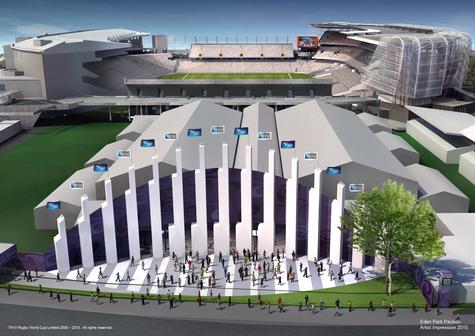 With the clock ticking down to the one year to go to the event, Rugby Travel & Hospitality (RTH) Limited have released the first visuals of a striking temporary structure that will combine tradition with innovation giving hospitality clients a glimpse of what to expect when the Tournament kicks-off on 9th September 2011.

Eden Park Pavilion, located in the shadow of Eden Park will only be a short stroll to the very best Category A undercover seats offered as part of the premium hospitality package and is a way for Rugby fans to guarantee their place at the semi-finals and Final of the Rugby World Cup 2011.

RTH, who won a major award for their innovative record-breaking corporate hospitality programme at RWC 2007 in France, view the Eden Park Pavilion as being the flagship of the Official Tournament Hospitality Programme.

The venue will play host to over 35,000 fans from all over the world during the Tournament, which will feature a distinctive entrance facade standing 53 metres wide by 20 metres high, blending the Official Tournament look and feel with the herringbone aspect of the RWC event mark to create a Rugby ball that will be visible from ground level or the sky.
Inside the Pavilion, fans will experience luxury and innovation through a blend of New Zealand cuisine, fine New Zealand wines and a full entertainment programme to give the venue a unique festival atmosphere.

David White, Director of Operations at RTH stated "the Eden Park Pavilion is the culmination of three years of intense planning. New Zealand has never before seen a purpose built structure of this magnitude and quality."

Rugby World Cup Limited Chief Executive, Mike Miller, stated "the team at RTH have unrivalled experience in the creation and delivery of outstanding, world-class hospitality facilities and delivered an award winning highly innovative hospitality programme for RWC 2007 in France. I have no doubt that the Eden Park Pavilion will raise the bar once again, providing the perfect corporate entertaining environment to rival all other major global sporting events."

Tournament Organiser, Rugby New Zealand 2011, Chief Executive, Martin Snedden believes the Eden Park Pavilion will contribute enormously to the success of the Tournament next year, adding "the Eden Park Pavilion is remarkable and will play a significant role in showcasing the very best of what New Zealand has to offer. We're very excited about this fantastic hospitality venue which we believe will enhance New Zealand's reputation as an outstanding destination for a global sporting event."

For more information go to www.hospitalitynz2011.co.nz