Mt Smart Stadium ‘not for sale’ 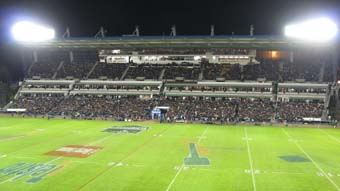 The Auckland Regional Council (ARC) has confirmed that Mount Smart Stadium will not be sold to raise funds to cover Eden Park's development shortfall.

Councillor Michael Barnett, Chair of the ARC's Mt Smart Special Committee, says even suggesting the sale of Mt Smart Stadium is short-sighted, stating "Mt Smart Stadium is categorically not for sale. To start with, the stadium is on Crown land, has status under the Reserves Act and meets specific functions outlined in the Mt Smart Regional Recreation Centre Act.

"It is home to the Vodafone Warriors, Auckland Athletics and Oceania football. It is also the confirmed training ground for Fiji and Ireland in 2011's Rugby World Cup.

"We will continue to promote the stadium as a premier sporting and entertainment venue, hosting the likes of the recent sell out Pearl Jam concert and Big Day Out."

Mt Smart is identified in the Greater Auckland Regional Sports Facility Strategy 2009 as being the home of rugby league and international athletics events. It would also be the main venue for the 2018 Commonwealth Games if Auckland's bid is successful.

The ARC has earmarked $10 million towards Eden Park's development.

It remains to be seen whether the new unitary Auckland Council, set to be in operation as of October this year, will retain the ARC's longstanding support for Mt Smart Stadium.