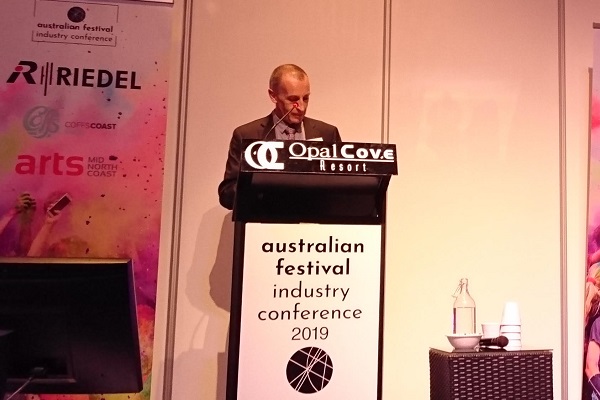 The event pulled delegates from almost every state and territory, and featured a range of private festival organisers, all tiers of Government, consultancy services, educational institutions, suppliers and industry stakeholders.

Conference founder and Event Director, Carlina Ericson, said that she couldn’t have asked for a better result, commenting “for a first year event, the feedback throughout the conference was overwhelmingly positive.

“Some delegates even remarked that it was the best conference they had ever been to.

“This is the first time in over 20 years that a conference has been held in Australia that’s specific to festival management personnel and it was really amazing to see everyone come together in such an open and optimistic manner.”

AFIC’s program of speakers were some of the country’s top festival management personnel who discussed key national issues affecting a range of festivals such health and medical safety, risk management and indigenous engagement.

The panel discussion covered the topic that’s been on everyone’s mind this year: pre-hospital health and medical safety at festivals.

The location was also fitting, with Coffs Harbour having recently won the globally-acclaimed International Festivals and Events Association (IFEA) ‘World Festival and Event City Award’ for a fifth year in a row.

Coffs Harbour City Council gave delegates a tour of the recently $13 million upgraded C.ex Coffs International Stadium, followed by a site tour with Zaccaria Concerts, ahead of their festival ‘By the C’.

“They want an opportunity to connect, learn, share, and discuss key issues that they’re all facing.

“If there’s one takeaway message for festival organisers across the country, it’s that they need to be in the room next time in order to stay up-to-date with the latest changes in their industry.”

An announcement regarding the next event is imminent.

To be kept informed of future event updates, visit www.australianfestivalconference.com.au