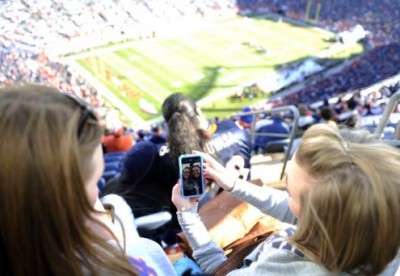 Gary Newbold explains how the latest wave of technology being introduced in leading sporting venues will impacts fans and managers.

Imagine walking into the stadium precincts to watch your favourite sports team, and your smartphone pings you that a $30 premium seat upgrade is available for purchase on your mobile device.

As soon as you settle in to enjoy that awesome view of the game, you use your phone to order a hamburger and beer delivered to your seat. Then, when your team’s star player scores a try, kicks a goal or hits a six, you use the team's app to watch an instant replay at multiple angles and a stadium-exclusive video feed of players on the sideline. Later, when nature calls, the app directs you to the closest restroom with no wait time.

This is not a far-fetched futuristic experience. It's already available at some venues, and others are working to add next generation digital systems that will make attending a game in person an immersive, connected experience.

At present this is all happening overseas, but Australian sports organisations have seen the technology in action, know the fans love it, and believe it can give their particular sport an edge.

In the USA, Extreme Networks has announced a strategic relationship with 2014 NFL Super Bowl champions Seattle Seahawks to deliver best-in-class Wi-Fi connectivity to fans at CenturyLink Field. Seahawks fans have a reputation for rocking the 67,000-capacity stadium with one of the loudest sounds in NFL. In September 2013, during a game against the San Francisco 49ers, they broke the Guinness World Record for loudest crowd roar at an outdoor stadium with 136.6 decibels. It follows that they need the highest density Wi-Fi!

The Jaguars will receive unparalleled mobile connectivity at their EverBank Field stadium, capacity 67,000. They will use IdentiFi® Wireless, along with SignalShare’s Live-Fi™ audience engagement platform, to deliver an enhanced user experience to fans. Extreme’s highly scalable solution will also act as a delivery platform for the Jaguars’ application, which offers exclusive content and special offers to thousands of fans.

Baylor University was an early Wi-Fi adopter at its new $US260 million on-campus McLane Stadium (pictured below) in Waco, Texas, which holds 45,000 fans. The stadium has been outfitted with a robust Wi-Fi network and custom mobile applications that enhance the in-game fan experience. 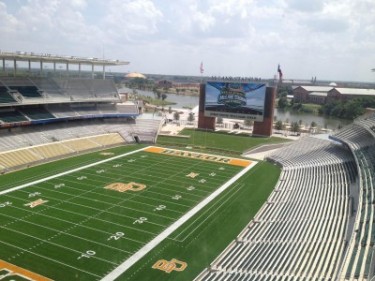 Extreme Networks rolled out the Baylor In-Game App, the first college athletics application to provide instant replays from multiple views to fans, at their seats. This combination of Extreme’s Wi-Fi gear, software applications and content is the same technology used by the world’s leading professional sports teams.

Benefiting from a vision of an immersive experience, Baylor fans are enjoying the freedom of using their wireless devices – smartphone, tablet or laptop computer – to access customised applications like the Baylor In-Game App that enriches their experience through in-seat mobile video replays, team information, customised camera angles and up-to-the-minute real-time statistics.

The app allows fans to download in the stadium to watch videos, news and in-seat replays of the action from multiple views over the Wi-Fi network, and to follow key real-time statistics of the action. Fans can stay connected to their team 24x7 through the In-game app.

The ultimate fan experience uses a hand-picked collection of innovative technology that allows fans to stay connected with the ultra-fast Wi-Fi network as well as a robust cellular distributed antenna system. Fans can direct their own mobile experience using in-game applications throughout a stadium.

According to one sports administrator, an in-game app represents a fan’s one-stop shop for anything and everything they need to know about their team. Fans can access video on their iPhones, iPads or Android devices, and they can watch the same program feed that is on the stadium video board, or they can choose from other cameras that will be streaming live all the time.

It is like having a DVR remote on a fan’s phone where he or she can watch replays and highlights from a seat in the stadium. The technology has been described as one of the most exciting experiences in sport, and a ‘must have’ that brings fans closer to the action whenever they attend a game, and also allows them to access real-time statistics, news, multimedia content, streaming radio, and more. Since sports administrators globally are keen on delivering a premium experience to their customers, this technology is fast making sports fans the winners.