Holographic dinosaur attraction set to launch on the Gold Coast 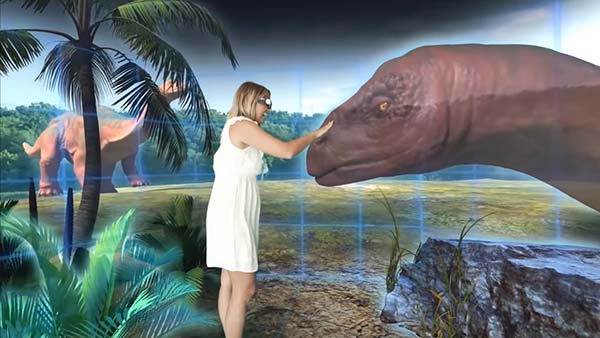 Holoverse, a 40-room holographic entertainment centre opened on the Gold Coast by Euclideon in 2016, is set to launch their Dinosaur holographic attraction tomorrow as part of National Science Week.

Visitors will enter one of 40 hologram rooms where dinosaurs appear around them that seem real but are in fact made of light. The dinosaur experience consists of 10 scenarios including flying through the sky with Pteranodons, escaping a T-Rex battle and watching dinosaurs hatch from their eggs.

Developed by Euclideon, a Brisbane-based technology company, the Holoverse virtual reality allows guests to walk into virtual worlds by simply putting on a belt and a pair of 3D glasses and moving around rooms.

Euclideon founder Bruce Dell advised "the Dinosaur experience is so life like, not only is it cutting edge entertainment but it also provides a glimpse into the future of archaeological science and holographic tourism. Australia is once again leading the way with ground breaking technology.”

Holoverse opened in 2016 with commercialisation grants from the Australian Government. It also boasts hologram tables, where multiple users can compete in arcade style games.

Euclideon recently opened a hologram arcade in Oman and anticipates new centres to open in North America and Europe by 2021.

For more information go to www.holoverse.com.au/