Hobart City Councillors have given unanimous backing for a $15 million upgrade of the Hobart Aquatic Centre to include a new 35 metre pool, dual external waterslide, wellness spa and sauna area, new change rooms and better access, including lifts.

Currently in its concept stage, the Council has  engaged Melbourne-based architectural firm Peddle Thorpe Architects to look at the business modelling behind the plan and have identified potential Federal Government grant programs (including the National Stronger Regions Fund) that could provide the financial assistance required for the redevelopment.

Commenting on the plan, Hobart Lord Mayor Sue Hickey stated “even though it’s a Hobart City Council facility, it’s for the whole southern region and attracts people from the mainland... (when complete) we’ll be able to bring more national and inter­national competition here.” 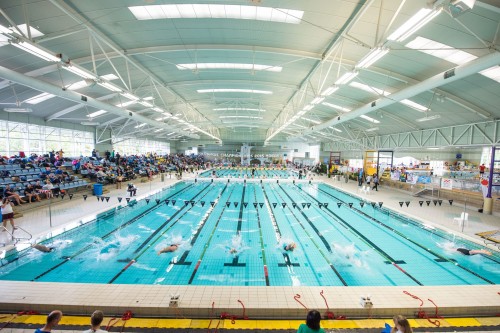 Approaching its 20th anniversary, the need for a significant redevelopment of the Centre has been identified as it goes through a gradual decline in annual attendances and increasing operating costs.

Prior to the Council’s recent vote, Parks and Recreation Committee Chairman Alderman Anna Reynolds said the existing centre, its car park and entrances were significantly below contemporary standards for disability access, and areas such as change rooms and spa facilities were not consistent with contemporary community expectations.

Images: The outline plan for the Hobart Aquatic Centre redevelopment (top) and the Centre's 50 metre pool during competition (below).