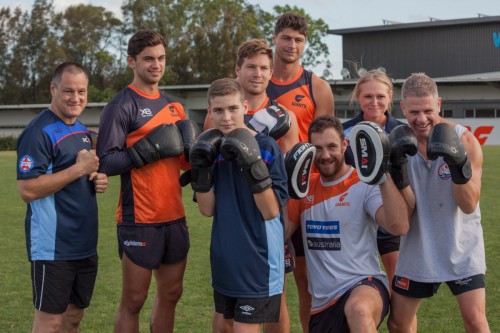 The GWS Giants, the PCYC NSW and the NSW Police Youth and Crime Prevention Command are looking to attempt a Guinness World Record next month by having 1000 people complete a 30-minute Boxercise program at Spotless Stadium, Sydney Olympic Park.

The attempt will take place immediately following the round eight AFL match between the GIANTS and West Coast on Saturday 12th May.

PCYC NSW Chief Executive Dominic Teakle said the Guinness World Record attempt represented a fun and exciting opportunity to showcase a united community activity that inspired and empowered young people to get active in life, advising “this record attempt represents everything that is good about PCYC, the NSW Police Force and our relationship with a GIANT of the community in the GWS Team.

“Participants and volunteers will come from many of the 64 PCYC clubs around NSW and we are grateful to our challenge partners the GIANTS for their support and patronage.”

The Commander of Youth and Crime Prevention Command, Superintendent David Roptell said it was a great opportunity to highlight the legacy of PCYC, a movement borne of the partnership between the NSW Police Force and Rotary, which has been empowering young people in NSW since 1937.

If successful, the Boxercise challenge will place PCYC and the GIANTS in the record books and benefits for participants will include bragging rights, free entry to the game and souvenir branded gloves and pads as take-home mementoes.

Kaveney added “we’ve always prided ourselves on being a club that provides great family entertainment and a unique game day experience at the GIANTS and this initiative fits perfectly with this.

“Like the GIANTS, PCYC do an enormous amount of work in the community and we’re excited by the opportunity to set a Guinness World Record.

“Spotless Stadium has repeatedly been voted by fans as the number one AFL stadium in Australia so I encourage as many people as possible to come along, watch an exciting game and get involved in this world record attempt.”