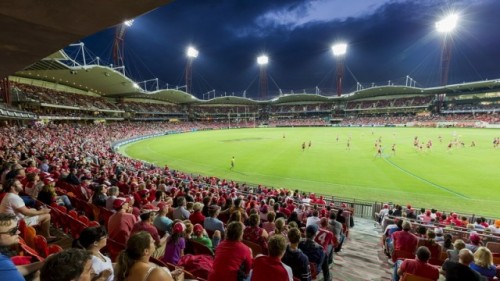 Ahead of Saturday’s expected sell-out AFL Preliminary Final between the GWS Giants and Western Bulldogs, the operators of Spotless Stadium have reinforced their intention to increase the venue’s  capacity.

Spotless Stadium received a significant upgrade in 2011 supported by investment from the NSW Government, AFL and the Royal Agricultural Society of NSW (RASNSW), the stadium operators. However, Stage 2 requires a minimum of $20 million in funding to increase capacity from 24,000 to between 30,000 and 35,000.

Having called Spotless Stadium home since their inaugural AFL season in 2012, the venue has been a key part of the GWS Giants expansion, including being ranked the number one AFL stadium for fan experience in 2015.

As the newest AFL team establishing themselves in a non-traditional AFL market, the GWS Giants have placed a high importance on engaging closely with fans to drive strong attendance and continued fan growth.

Not only is the Stadium the home of the GWS Giants AFL club, but it also hosts the BBL 2015/16 Champions the Sydney Thunder, and from October, will host the A-League’s Western Sydney Wanderers for eight home matches in season 2016/17.

This is in addition to acting as the Main Arena for Australia’s largest ticketed event, the Sydney Royal Easter Show.

Sydney Showground General Manager, Peter Thorpe, said it has been an unbelievable year for the venue, with sell-out games for BBL and AFL, in addition to a season victory for the Thunder.

Thorpe explained “we witnessed an incredible season for the Thunder in the BBL, and we’re hopeful the GWS Giants can emulate their success in the weeks to come.

“We’re proud to be the home venue of such an incredible club, which has come on in leaps and bounds over the last few years, both on and off-field.”

Explaining that both the venue and Western Sydney would benefit from increased seating, Spotless Stadium Chief Operating Officer Darryl Jeffrey added “Spotless Stadium is a world-class venue, which in the last five years has become home to three successful Western Sydney sporting franchises, as well as being a multi-purpose Stadium that hosts the annual Sydney Royal Easter Show.

“Stage 1 construction took place in 2011 and not only brought capacity to 24,000 but also built the foundations required for Stage 2. A minimum of $20 million would allow for a further seating expansion as well as other minor works enabling 5,000 to 10,000 additional seats.

“The RAS has been in positive discussions with the NSW Government over recent months regarding this matter and we are confident a satisfactory outcome will be achieved.

“We’re excited about this weekend’s fixture, and coupled with the Sydney Thunder’s growing demand including a sold out game at last season’s BBL tournament, this has highlighted the justification to increase the capacity of Spotless Stadium.

“30,000 to 35,000 seats is the ideal size for Western Sydney’s premier oval stadium, and this would also increase the attractiveness of Spotless Stadium to the organisers of the T20 Cricket World Cup to be held in Australia in 2020.”.

The Stadium was originally built as the baseball stadium for the 2000 Sydney Olympics and is now operated by the RASNSW.

Tickets for Saturday’s game are in high demand as a result of the AFL sticking with historical modelling and scheduled the match at the Giants' home ground rather than the much larger ANZ Stadium.

Funding for the expansion of Spotless Stadium was not part of the NSW Government $1.6 billion package to upgrade Sydney's major sports stadia announced in April this year.