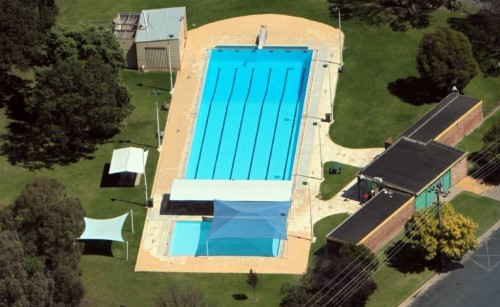 Opened on Saturday (9th December) after the postponed of their originally planned re-opening the previous week as a result of wet weather, the redevelopment project involved reconstruction of the original main swimming pools and children’s pool and as well as reconstruction of the amenities.

The projects have produced attractive contemporary facilities that will cater for all potential patrons by being full wheelchair accessible while being equipped with solar heating, a compliant springboard, and enhanced plant and filtration.

In undertaking the redevelopment, the Council was successful in attracting $1 million grant funding from the Australian Government’s National Stronger Regions Fund, with Council contributing $1 million from loan borrowings. The balance was funded by existing reserves and local community contributions.

Commenting on the refurbished facilities, Greater Hume Council Mayor Heather Wilton advised “the Henty and Holbrook War Memorial Swimming Pools are major assets for our shire, and will assist Council to attract and retain residents.

“Feedback from residents indicates that the new pool complex are very popular ... locals are loving their new pool and are enjoying the modern facilities.

“Council recognises that the provision of contemporary public amenities is vital for community connectedness, health and well-being, and public pools provide entertainment and respite from summer’s heat for many families.”

The original Holbrook pool was built in honour of the 280 men and women who enlisted during the Second World War and as a memorial to the 20 men killed in the conflict.