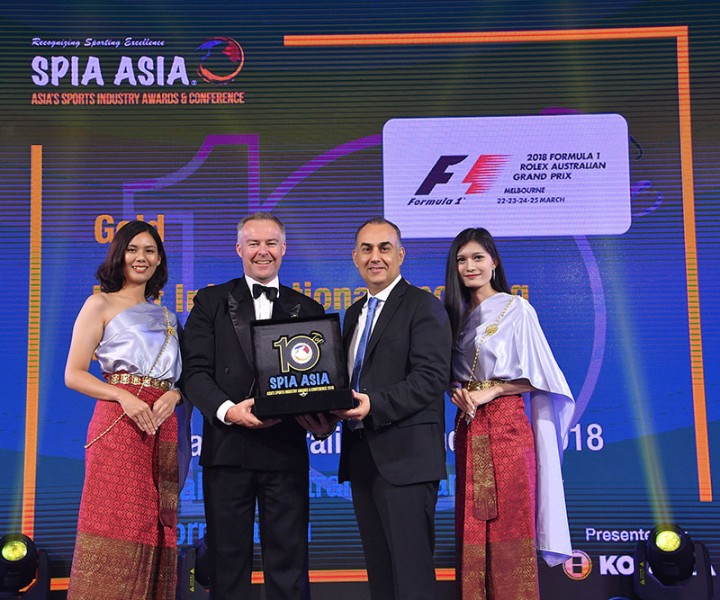 Staged overnight at the Centara Grand & Bangkok Convention Centre in Thailand, the top award rounded out a successful night for the Formula 1® 2018 Rolex Australian Grand Prix, claiming gold in the following categories:

Adjudicators of the 2018 SPIA Asia Awards received hundreds of submissions from 47 countries across 22 different categories.

All submissions were judged by a panel of high-profile industry experts in a stringent four-step process, adding to the achievements of the Australian Grand Prix Corporation.

The Australian Grand Prix Corporation (AGPC) Chief Executive Andrew Westacott, said he was honoured and proud to receive three awards, including the coveted Best International Sporting Event of the Year category, as well as back-to-back wins in the Best Integrated Marketing Campaign for a Sports Event.

“As an organisation we are thrilled to have been recognised by leaders of Asia’s tourism and sports industry among an extremely high calibre field of entrants. These awards are a credit to the talented AGPC staff and extended Grand Prix family that make this event possible,” said Westacott.

“The Formula One Australian Grand Prix has proven to be more than just a race – it has evolved to become a four-day festival-style showcase that attracts visitors from across Australia and around the world, while promoting Melbourne and Victoria to millions of fans globally, creating value for the state of Victoria.

“It is also a benchmark for international events not only in Australia but around the globe because of the undeniable economic benefits the event generates for Victoria including job creation, industry development, reputational enhancement, community involvement and civic pride,” continued Westacott.

There was further success for Melbourne when Visit Victoria also landed gold in the Best Sports Tourism Destination of the Year category, reaffirming the state’s global reputation for staging world-class sporting events.

For further information about the 2018 SPIA Asia Awards, including all award categories and winners, visit http://spiaasia.com/