Australian F1 Grand Prix to stay in Melbourne until 2020 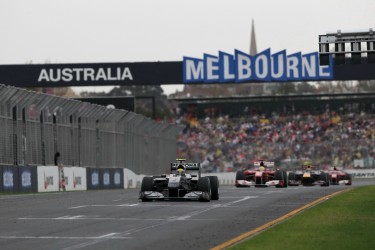 The Australian Grand Prix will stay in Melbourne until 2020, after a new contract was signed by the Victorian Government.

The deal was signed in London last week, after a year of negotiations.

The Victorian Government will not say how much the contract cost, but says it is the best deal for Victoria.

Commercial rights have been retained under the contract, meaning Melbourne branding will be prominently displayed to the race's hundreds of millions of viewers.

The race will remain the first of the Formula One season.

Victorian Premier Denis Napthine says the Grand Prix creates up to $39 million for the economy and about 400 full-time jobs, adding that the deal confirms the city as a world-class sporting destination.

Dr Napthine explained "this is a fantastic deal for Melbourne and Victoria.

"This delivers enormous jobs and economic benefits to our state and reaffirms Melbourne and Victoria as the sporting and major events capital of the world.

Last year's race cost Victorian taxpayers $50 million. The event has been held at Albert Park since 1996, when it moved from Adelaide.