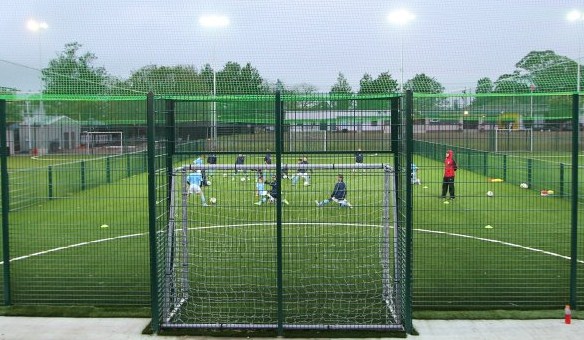 Predicted as being 'the next big thing' in sports facility management, a growing number of five-a-side football centres are opening in NSW.

Fuelled by the success of United Kingdom operators PowerLeague, Soccer City and Goals, a number of investors have been investigating similar operations of multi court futsal, five-a-side, and indoor soccer centres in Australia. Over the past 15 years, multi-site five-a-side football centre operators have helped make '5s' (futsal is less popular in the UK) the highest regular participation activity for footballers in the UK.

The most recent entrant into the NSW market, Soccer5s, opened eight x five-a-side and two x seven-a-side 'small-sided' football pitches at the Mariners Centre of Excellence at Tuggerah on the NSW Central Coast in December.

Their 15-year lease arrangement with the Mariners will be an important part of the management of the Mariners Centre of Excellence while Soccer5s have been the Mariners' shirt sponsor during the current A-League season.

Soccer5s Operations Director John Smith explains that "five-a-sides is great for the entire community and we will provide competitions for men, women and enthusiastic young people and teenagers.

"Ladies can show off their skills in mixed leagues and prove that soccer isn't just for the boys!

"(Soccer5s) is fast, fun and contagious; it allows players to develop ball skills and tactical awareness. Five-a-side can be played by people of varying age and skill set. Soccer5s is completely flexible; we can provide leagues, tournaments, casual games and even club training."

The Football Factory in Sydney's Frenchs Forest is an indoor single court facility that offers a unique football training environment.

It combines the advantages of an indoor facility with an artificial turf surface to replicate the perfect playing and training conditions. It also includes automated training aids such a Laser Light Gaits, Ball Firing Machines and Radar Guns, to improve and develop the skills for players at all levels and for all ages.

Opening its first facility on formerly dilapidated tennis courts at the Harbord Bowling Club, on Sydney’s northern beaches in 2009, KikOff Soccer Centres now operate three facilities across Sydney – the others being located in the inner city suburbs of Riverwood and Kensingtton.

Managing Director Nigel Bramley, along with a UK-based business partner, has spent just under $500,000 in installing surfaces and facilities at each centre and is already confident the centre will be well received.

Bramley explains "five-a-side football is massive across the world and only in recent years Australia has started following the trend."

Six years of negotiations between 5sports, the ESHS and the NSW Department of Education and Training, resulted in construction of the facility commencing in 2011 and finishing earlier this year.

5sports have been provided with the land on the premises of ESHS as a result of having installed and provided a full size artificial turf football field for use by the school during school hours. The school also has access to the 10 multi-purpose courts during the school hours.

Curtis explains "our goal is to ensure the commercial viability of 5sports by providing world class community based sports and leisure facilities."

ESHS staff are enthusiastic about the facility, Director of Sport, Dave Davids stating "we now have a truly world class sports facility that caters to the needs of all our students and the greater community. I believe we will be the envy of not only other schools, but councils and clubs who are all struggling with grounds that are unplayable.

"Under our agreement with 5sports, we have complete use of the facility until 4pm each school day before they take over and open it up to the entire community so it s a win for everyone in the Shire.

"As the first school in Australia to host a 5sports facility we hope that our example can be followed by other public schools in order to provide the very best opportunities to all our children."

Construction Manager for 5sports, Greg Heaps, is a Cronulla local and has built in excess of 70 artificial football, AFL and hockey fields throughout the world.

Heaps concludes "every element of the facility is built to the highest specifications so the 5aside courts and full field will never be washed out.

"5sports is as good as it gets with state of the art components and systems being used in every element of the project.

"As a local with young kids who have had their sports washed out on weekly basis I am thrilled that the facility is about to open for use by the entire community."

5sports is set to be formally launched by a NSW Government Minister at the end of March.