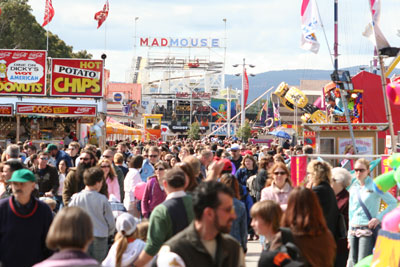 Following the death of child of who was flung from a ride at the 2014 Royal Adelaide Show on Friday (12th September) the final days of the event have been further affected by the closure of a second ride.

The Traffic Jam childrens' ride was closed by show organisers late on Saturday (13th September) following an image that apparently showed ride restrictions having been broken was circulated on social media.

Royal Adelaide Show General Manager Michelle Hocking told the ABC that the Royal Agricultural & Horticultural Society of South Australia was yet to verify the authenticity of the image, but was not willing to take any risks following Friday's accident on the Airmaxx 360 ride.

Hocking stated "we're not sure about the authenticity, if you like, of the photo, but we are not prepared to take any risks."

Hocking explained that once a ride and its operator has been reported and ordered to close, it cannot be reopened without SafeWorkSA's approval, adding "regarding what happens to the operator that is totally something that is worked out between the authorities and the operator."

Hocking said support for the final weekend of the annual event had continued despite Friday's tragedy.

She continured "support has been really good. The community has come out and there is a lot of sadness, that goes without saying, since the tragedy on Friday."

Neither the Airmaxx 360 or Traffic Jame will operate at the Royal Melbourne Show, which on Saturday 20th September and runs until 1st October.

Durkin stated “the incident at the Royal Adelaide Show was a tragic one that has left the whole amusement industry feeling numb.

“There are high standards and safeguards in our industry to ensure the many thousands of people who enjoy themselves at our facilities and rides do so in a safe and secure environment.

“These high standards and safeguards form part of every operator’s standard operating procedures.”