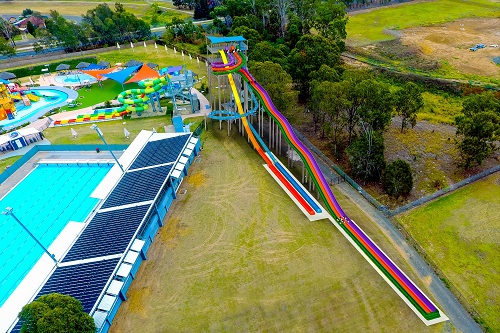 Fairfield City Council has announced the addition of five new waterslides at its Aquatopia attraction - set to open for the upcoming swimming season.

After a busy summer season in 2017/18 that saw 60,000 people come through the gates, Council will take the water fun to another level by building a new 20-metre tall slide tower - double the size of the existing slides.

The addition is seeing the construction of a new slide tower which will feature a 3-Lane Racing Ride, a high-speed free-fall slide  and the Rocket Drop Slide - which will drop brave riders via a trap door to a fast loop through a transparent tube that will circle the free-fall slide on its way down.

Announcing the additions, Fairfield City Mayor Frank Carbone stated “in just two years Aquatopia has gained a reputation as being a fun, affordable day out for families looking to keep cool in our warmer months.

“I expect that there will be plenty of people keen to race their friends and family on our racing slides.

“These slides will really be for the thrill seekers of the family. The free-fall slide promises to be very fast, and the Rocket Drop Slide adds the suspense of a sudden drop to the excitement.”

Also under construction is the Fishpipe - a huge water-filled ball that will roll swimmers around like a giant washing machine.

Adding that the attractions is the only one of its kind in NSW, and one of only two in the country, Mayor Carbone advised “visitors will love cooling off and getting pummelled about inside the Fishpipe.

“With these new attractions, as well as the activities already in place, there will really be something for everyone at Aquatopia.”

There are also cabanas and BBQ facilities, which can be hired for parties and corporate events.

The new slides are from Polin Waterparks, installed by Swimplex Aquatics.

Aquatopia will reopen for the 2018/19 season on Saturday 22nd September.