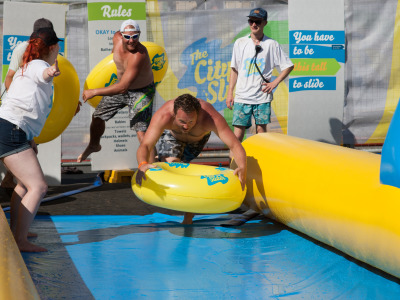 Fairfield City Council is advancing a range of aquatic initiatives with plans for a giant inflatable waterslide currently being considered while also developing a waterpark that will feature Australia’s first Stingray half-pipe surf simulator.

Having opened its $1.4 million Adventure Park playground in April, the Western Sydney Council is progressing its waterpark development at the Prairiewood Leisure Centre.

Due for completion in 2016, the waterpark will feature waterslides, aquatic play features and a surf/skim-board half pipe surf ride simulator, being provided by UK-based Murphys Waves Ltd.

Murphys Waves are well-known for their design and manufacture of high quality wave machine generators and wave pools, having equipped the wave pool at Jamberoo Action Park. However, the $1.3 million Stingray will be the first installation of their specialised surf generator in Australia.

Explaining the simulator’s usage, a Murphys Waves statement comments, “for general waterpark use Stingray can function in a lower power setting to give a thrilling body boarding experience, or for more experienced groups or competitions it can be used with our specially designed skim boards allowing riders to stand up and carve high onto the curved side walls.”

Outlining the development, Faifield City Mayor Frank Carbone explained “one of the City’s key priorities is to invest in local infrastructure for the present and for the future.

“The new waterpark ... will give children the opportunity to learn to surf without having to travel to the coast.” 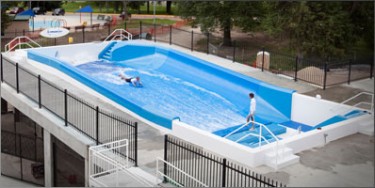 The Council is currently undertaking a feasibility study on the slide to decide if it will be implemented.

The City Slider is more than 300 metres long with two lanes for multiple people to enjoy the ride at once.

If acquired by the Council it will be used in a variety of locations: including at the Prairiewood Leisure Centre and for special events.

Click here for more information on the City Slider.

Images show the City Slider (top) and a Stingray from Murphys Waves (below).