Event highlights the importance of developing Nature Play across NSW 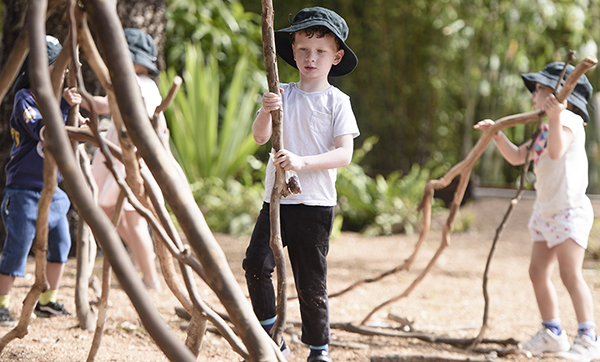 An event hosted by Outdoors NSW & ACT on 10th of December brought together 100 participants from the NSW outdoor sector to discuss the development and growth of Nature Play in the state.

With WA, QLD, SA, ACT, and VIC all having dedicated nature play organisations, Outdoors NSW & ACT deemed this event to be an important action for inclusion across a range of industries including urban planning, preventative and restorative health care, active recreation as well as primary and early years education.

Outdoors NSW & ACT Chief Executive, Lori Modde advised “it was so pleasing to hear that we have a united voice when it comes to the importance of nature play in this state. We had representation from Nature Play Australia, Network of Community Activities, NSW Early Years Nature Connections group, Australian Association of Environment Education, early childhood practitioners, environmental educators, local councils, out of hours school care providers, landscape architects, urban planners, park managers, parents, and researchers.”

The Western Sydney University published research paper, ‘Wild Play Garden’ (Dobia, Truong, Ward, Regalado, 2019) deduced nature play exposes children to risk in order for them to learn and increase resilience. Parents noticed their children enjoying the freedom to explore and to take risks in a safe environment. This is one of many research articles that prove the benefits of playing, learning, and being educated outdoors.

Fran Hughes, convenor of a professional development networking group known as NSW Early Years Nature Connections noted “there is much current research about nature play and in support, we know it has benefits and those practicing can demonstrate these. What we now need is a wide-ranging association that invites more people; practitioners, teachers, and children to access nature play so we can provide results for children and families.

“Increase social, physical and language skills, increased resilience, self-management, cooperation with others, increase imaginative play, develop positive relationships with self, others and the environment to name a few.”

As a result of demand and need, the Greater Sydney Parklands are currently developing a Nature Play Strategy in partnership with many stakeholders across NSW, including Outdoors NSW & ACT, Network of Community Activities to name a few, that will take form in 2021.

Modde added “we saw the effects of COVID on our kids and youth so it’s so important we move on these solid findings and start with the younger years on getting them outdoors, playing, and discovering nature more.”

In a research paper about growing up in a digital age in Australia by the Gonski Institute in 2020, 84% of teachers surveyed believe that digital technologies are a growing distraction in the learning environment. More than nine of ten educators think that the number of children with psychological, social, and behavioural challenges has increased in the last three to five years. Empathy has also declined, as well as student physical activity.

Outdoors NSW & ACT also advise that as we were coming out of lockdown Tom Mulvaney, Psychologist, and Co-Leader of Policy at the Australian Association for Bush Adventure Therapy spoke to the media on a similar line in which he commented “we need to keep people physically and mentally well through a system that caters for a safe, stable and connected time in the outdoors. Going outdoors is one cost-effective and safe way to support physical, mental, and social wellbeing and prevent longer-term ill health.”

Greater Sydney Parklands coordinator of Education Services, Sam Crosby who facilitated the Outdoors NSW & ACT event added “bringing together a wide spectrum of people and organisations to discuss the opportunities that nature play can bring was extremely inspiring and I look forward to building on the success of this forum to develop a movement for nature play in NSW and all of the benefits it brings for children and families.”

5th May 2014 - Nature Play passports to encourage activity for children