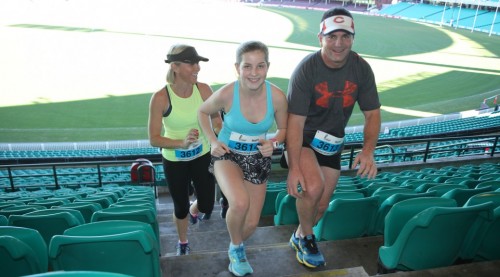 Following the success of its inaugural event last year, Domain Stadium’s Stadium Stair Race will be returning on Saturday 20th February this year – with participants set to traverse the historic venue’s 6,000 stairs.

Sponsored by Anytime Fitness Australia and raising funds for The Multiple Sclerosis Society of Western Australia (MSWA), the fitness challenge is part of a stair race trend that has become increasingly popular worldwide.

However, Domain Stadium’s Stadium Stair Race will differ from other events in raising funds for a worthy cause while offering participants the opportunity to explore Domain Stadium – which has hosted has seen historic AFL Finals, international sporting events as well as major rock concerts - as never seen before.

Climbers will be able to race through the Fremantle Dockers change rooms, exclusive VIP rooms and through the stands, finishing out on the hallowed turf under the stadium lights at dusk.

MSWA Ambassador and West Coast Eagles player Josh Kennedy encourages everyone to get involved in this unique sporting event, stating “Domain Stadium is the West Coast Eagles home and Fremantle Dockers home, so there’s a lot of sporting history on the grounds.

“Anytime Fitness Stadium Stair Race is a great chance to explore all corners of the stadium, as well as get fit with your friends and potentially even become a sporting hero yourself.”

Stadium managers Perth Stadium Management (PSM) is looking forward to the opportunity to provide a great experience with a difference with General Manager PSM Gavin Taylor saying he is proud to offer an event where those usually spectating at the Stadium get to participate.

Taylor commented “our fans have been to Domain Stadium to see football and entertainment, but in this event they get the rare opportunity to race through and see behind the scenes spaces.

“The Stadium has hosted some of Australia’s biggest sporting champions celebrating their biggest moments, and we are welcoming people to take part in that feeling.”

MSWA Chief Executive Marcus Stafford said MSWA has joined again as charity partner after a hugely successful first year that saw $42,000 raised to help Western Australians living with MS, concluding “not only do people that take part get to benefit from a fun fitness challenge in an iconic WA sporting venue, money raised from this event goes towards helping people in Western Australia living with MS and other neurological conditions.”

MSWA has committed record amounts to national research. In 2015 alone it invested $1.5m, with $0.5m of this contribution being used specifically for research being carried out in Western Australia.

In addition to the races there will be a range of activities for all the family, including a range of food and drinks, childrens’ activities such as face painting and kick-to-kick, music and a recovery zone for all competitors.

For more information go to www.stadiumstairrace.com.au