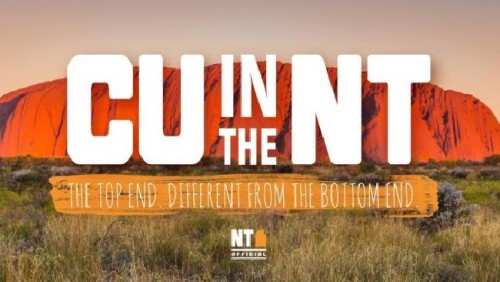 An apparently unofficial marketing slogan promoting the Northern Territory, 'CU in the NT', has generated massive attention since going online at the end of last week.

Going a step further than Tourism Australia’s ‘Where the bloodly hell are you?’ campaign of 2006, the slogan can be found on images of the Northern Territory and a range of merchandise.

NT Official - which supposedly has no connection to the Northern Territory Government’s tourism agency Tourism NT – have released a statement describing themselves as being a “guerilla group of people with the aim of promoting travel awareness to the NT region, specifically targeting younger markets”.

The unconventional strategy has generated a mixed response but is likely to be effective in promoting the Northern Territory, which has experienced declining tourism numbers since 2000, among younger tourists.

The BBC reported “the word the ad plays on is generally considered misogynistic and highly offensive. But in Australia, it is often not taken as seriously as in other English-speaking countries, sometimes being used almost affectionately.”

In response to the campaign, Tourism NT tweeted “(we are) aware of inappropriate use of our trademarked Brolga logo. We are in no way affiliated with these promotions," while some media outlets suggested the Northern Territory Goverment may take legal action for copyright infringement.