The Award to the aquatic, recreation and sport centre, presented at a recent gala event in Perth, takes to 15 the number of awards won by the $109 million facility since opening in May 2017.

The award recognised the ARCs entire brand development in the lead up to and since opening, including a provocative SunSmart campaign which attracted attention due to its effective floor stickers sporting the memorable ‘It’s not called Cockburn for Nothing’ slogan, as a way to encourage patrons to slip, slop, slap and slide to prevent sunburn and skin cancer.

The award prize is a $20,000 leadership and management training package to be donated to a Western Australian charity with Cockburn ARC naming Cancer Council WA as the worthy recipient. 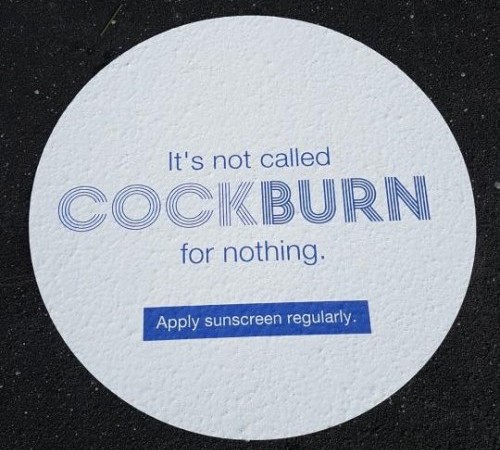 The Award provides recognition for an organisation that has achieved outstanding results through key initiatives that demonstrate leadership and commitment to excellence in marketing and public relations.

Cockburn ARC Chief Executive Stephen Cain said the ARC had stiff competition from great campaigns run by the other finalists such as the West Coast Eagles, West Coast Fever, and the City of Albany’s Visit the Great Southern campaign.

Accepting the Award Cain stated “good ideas only become great ideas, by giving the flexibility to good people to make them great.

“The ARC may have been a good idea, but it took the collective and creative skills of a whole range of our staff to make it the great project that it is today.”

City of Cockburn Mayor Logan Howlett said the ARC’s popularity was unrivalled with 2.45 million people through the door since it opened and total visits during the month of January up 9% on last year’s figures.

Cancer Council WA SunSmart Manager Mark Strickland congratulated the ARC on its win and for extending the training package to the well-known charity.

Strickland added “thanks for running such a great campaign and also for thinking of Cancer Council with regard to the prize. We all had a chuckle when we saw the floor stickers. We are thrilled with the way it’s all unfolded.”

The innovative way in which the management team at the Cockburn ARC developed the facility’s brand was recognised with the presentation of the Australasian Leisure Management Local Government Award as part of the 2017 Leisure Industry Communication and Marketing Awards.

Images: The Cockburn ARC team receive the Australian Institute of Management (WA) PRINTSYNC Pinnacle Award for Marketing Excellence (top), the ‘It’s not called Cockburn for Nothing’ slogan (middle) and the facility's outdoor 50 metre pool (below)