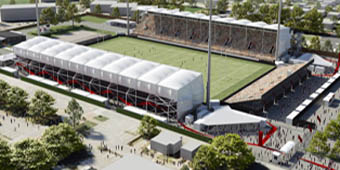 Insurer Civic Assurance recently said the former AMI Stadium could be repaired despite the Council writing off the ground and committing to demolish the stadium and replace it with a half-billion dollar venue in the city's CBD.

The council plans to contribute more than $200 million dollars towards the new stadium, including an expected insurance payout of about $140 million.

However, Civic Assurance says initial work suggests Lancaster Park can be repaired for under the full insurance amount, with Chief Executive Tim Sole saying that further investigations into the site are still to be done and reviewed by the engineers.

Council Chief Executive Tony Marryatt says that a new stadium will be built in Christchurch "because that's what the recovery plan says".

Marryatt said the Council would take a cash settlement below replacement value rather than return to the old ground, adding "the only risk for council is we don't get the $143 million insurance that we would get if the facility was written off.

"The council has committed to putting a certain amount of funding into (a new covered stadium). If we don't get the anticipated insurance payout, we're going to have to look at how we fund any shortfall."

Agreed settlement figures for the now-demolished Christchurch Convention Centre and QEII Park Recreation and Sport Centre were reached after similar "debate" was had with Civic.

Maryatt told Fairfax NZ News "at this stage, we haven't got to that (with Lancaster Park), but from our point of view what we've budgeted for is that it can't be repaired and we get the full payout of $143 million.

"If at the end of the day that isn't the outcome, and all parties agree that it could be repaired, then there'll be an amount that council will be paid, and it will be less than $143 million. The issue for council will be the gap between those two figures."

Marryatt added that Lancaster Park is the Council's largest individual claim and reinsurers in Germany, Switzerland and the United States were "very interested" in the settlement.

Of the council's larger Civic claims, only the Convention Centre and QEII Park had been settled while Centennial Pool, the Town Hall and Central Library are still to be resolved.

Meanwhile, the Save Hagley Park campaign has welcomed the possibility of Lancaster Park being rebuilt.

Under plans for a new stadium, which would be rectangular in shape and unsuitable for cricket, Hagley Park would be upgraded into an international standard cricket venue.

A statement for thre campaign group read "the news that Lancaster Park can be repaired is good news for Hagley Park. There is now no reason to allow a stadium for all forms of the game in Hagley Park.

"Canterbury Cricket (CCA) should be happy that their old home ground is repairable and when repaired will be able to cater for the 15-20,000 spectators for their day/night games.

"(There would be) no need for temporary fences, portaloos and removeable facilities that they would have had to use in Hagley Park.

"The $20 million CCA were going to spend on Hagley, can be used to make Lancaster Park the best cricket ground in the country."