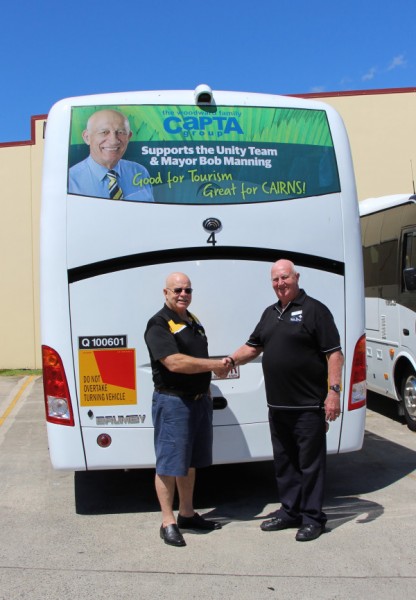 The owners of Cairns-based tourism company the CaPTA Group have taken the unusual decision of allying their brand with a grouping seeking election to the Cairns Regional Council.

Owned and operated by the Woodward family, CaPTA Group has decided to support Bob Manning’s Cairns Unity Team and their commitment to the tourism industry, with signage being added to several Tropic Wings coaches ahead of the upcoming local election.

In a press release the tourism operator explain that during Bob Manning's time as Mayor (he took on the role in 2012), "the Cairns Regional Council committed $3 million to the Cairns region for the tourism industry in the most recent budget; a 600% increase from the $500,000 committed by the previous Council."

CaPTA Group Chairman Charles Woodward said the investment made by Manning and the Cairns Unity Team was vital to ensure Cairns and the tourism industry continue to grow and flourish.

Woodward stated “we are in a tourism growth period at the moment, and it is critical that the tourism industry receives this level of support from Cairns Regional Council to ensure the growth continues,.

“Tourism is the backbone of Cairns, and a thriving tourism industry has a great impact on the Cairns economy and jobs.”

“We call on the Jim Brooks Connect Cairns party to at least commit to the same level of support for tourism.”

The Cairns Unity Team also has a close connection to the CaPTA Group - Councillor Jessie Richardson’s husband, Peter, is a driver with Tropic Wings Cairns Tours & Charters, one of the companies in the group.

During his time as Mayor, Manning has been dogged by controversy offer the closure and liquidation of his Events NQ business, with staff entitlements reportedly going unpaid.

A Grant Thornton liquidator’s report released at the beginning of February said the winding up of the business released assets of $349,694, with debts of $664,913.19. During the liquidation, plant and equipment valued at $650,000 was sold to the highest bidder for $333,901.