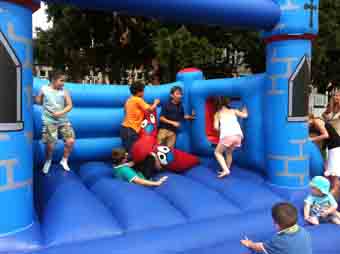 A new Canadian-led study has found that that more children are being injured on landborne inflatables (bouncy castles) than on mechanical amusement rides.

Lead author Professor Kathryn Woodcock is Director of the THRILL Lab (Tools for Holistic Ride Inspection Learning and Leadership) at Ryerson University, which has studied various aspects of amusement ride design and engineering for 10 years.

In an interview with Canadian media, Professor Woodcock explained that, given the rarity of ride injuries, using a national level database offered the best chance of having enough data for meaningful analysis.

Professor Woodcock, a past author for Australasian Leisure Management, explained "it makes sense to differentiate by ride type because the interaction between the rider and the ride depends on the type of device it is, and the 'failure modes' are different."

The findings were published in the February issue of the journal Safety Science.

Professor Woodcock reviewed injury reports collected from around 100 hospitals across the U.S. which were recruited to take part in NEISS. The 476 records included in the analysis represented national estimate of 13,770 injuries associated with amusement rides for the country in 2010. Each report included the injured person's age, gender, ethnicity, diagnosis and the nature of their hospital visit.

The study also revealed that 20% of injuries were from roller coasters, followed by carousels (3%) and bumper cars (3%). One-third of the injuries reported did not specify the particular ride.

Professor Woodcock added "for the reports that identified the type of ride, inflatable bounces and slides were involved in more reports than mechanical rides.

"This is consistent with other observations that patron-directed rides are more vulnerable to errors and misuse.

"This is an important finding to confirm, because many people perceive mechanical failure as their chief concern. The types of rides reflected in the injuries sustained across the age spectrum tends to correspond to the types of rides used at different ages."

Females made up a slight majority, 58%, of injured riders while boys made up 65% in the under fives age group, but females were the majority in every other age group.

Professor Woodcock said it's important not to overload inflatables with too many children or to have heavy or high-energy preteens jumping in the bounce at the same time as toddlers. Individuals should also slide - not jump - down an inflatable slide in the correct position one at a time.

She stressed that operators also need to monitor rider behaviour closely, and ensure the inflatable has been set up properly, with all the tie-downs properly secured in the appropriate manner for the location, Professor Woodcock noted.

If outdoors, it should be removed from operation if manufacturer's weather requirements are not met, such as high wind, she added, concluding "it can be tough for parents to verify that inflatables have been licensed for operation, but it is worth it to check for permits and watch before allowing your own children to bounce. A parent's instincts will often notice the difference between exuberant play and wild behaviour."

Australian Standard 3533.4.1- 2005 'Amusement Rides and Devices, Part 4.1 Specific requirements Land Borne inflatable devices' sets out requirements and guidance for the design, manufacture, operation and maintenance of land-borne inflatable amusement devices (such as jumping castles) that are static when in use. This standard covers those types of devices that are used commercially as part of an entertainment or leisure activity business.

For more information on Australian Standards go to www.standards.org.au