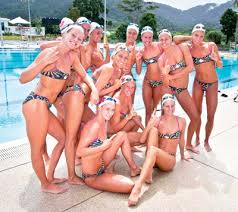 Training in TSLC's world-class facilities produced great dividends for the team who were able to win the bronze medal in the keenly contested Free Combination competition behind Russia and China.

Synch Canada Coach, Julie Sauvé, said she would have no hesitation in returning to the TSLC for training in the lead up to the 2012 London Olympics, which the team will strive to qualify for.

Sauvé explained "this facility is just fantastic. I have never seen anything better in the world.

"I mentioned to the team that our pool (in Canada) was not as good as what we have experienced at the club in Phuket, so it was the perfect opportunity to tune our routines and being able to walk from the hotel to the training facilities was a huge advantage."

As well as providing accommodation for Canada Sync's athletes and team managers, the TSLC was responsible for their strict dietary programme – using fresh organic ingredients from the TSLC's DiVine Restaurant – during the gruelling training regime. The elite squad were seen training everyday in the club's state-of-the-art gym and its three-metre deep, 50-metre eight-lane swimming pool.

Thanyapura Chief Executive, Nick Seaver expected that the Olympic athletes from Canada would be the first of many world-rated teams across a number of different sports and disciplines that would make use of the TSLC's facilities.

Seaver explained "it should be made clear though, that our sports club is not just for elite athletes. We are also very much focussed on bringing children, teenagers and amateurs from all over the world through our facility so they can get enjoyment out of their sport and hopefully pick up a few tips on how to improve their performance."

The TSLC also runs a number for different programmes for amateur athletes, children and teenagers in many areas including, soccer, triathlon, swimming and tennis.

Thanyapura, launched in 2010 as the Phuket International Academy, offers a diverse portfolio of unique properties centred on one idyllic campus in the heart of Phuket.

Unrivalled on Phuket, Thanyapura presents the ideal destination for active leisure travellers, professional and amateur sports enthusiasts, corporate groups on offsite retreats, seminars, incentives and team building as well as for the active and wellness needs of the local community. Thanyapura prides itself on being a responsible member of the Phuket community, operating with integrity as equal opportunity employers and adhering to the highest ethical standards.

For more information go to www.thanyapura.com/